So this was a pleasant surprise. I got an Amazon giftcard for my birthday and stumbled upon one of these. It seems to be a combination of the Limited Gift Edition and 1949 Clue games.

It seems that the company is selling their game by advertising it's classic gameplay. This may well be a trend which might inspire other companies to make money off a product Hasbro seems to have abandoned.

I am so getting one!!

Interesting that it is not on the Winning Moves website yet. They already did this with the Classic Monopoly game which retains the purple properties, which have become brown in all the current editions, and kept the proper colors and dimensions of the deed cards and Chance and Community chest cards, which are all the same size and color now.

So happy to see this. I was hoping that a third party would try to capitalize on the bitter taste DTS has left in traditionalist's mouths ... and probably Hasbro's plan all along â€“Â let somebody else carry the burden of the old declining-sales style while they promote the heck out of the new. They make money either way. And Winning-Moves is the perfect company to do this.

Curious combination of artwork however. Interesting since Winning Moves put out the 1949 reproduction & LGE, which means they don't have to create any new artwork or re-license the Drew Struzan suspects artwork (for which he surely gets a royalty?).

I'm assuming the weapons are the 1949 edition as well, but the room cards must surely be from the LGE?

I appreciate the motivation behind this and it looks rather elegant overall, but I'm not sure if the two styles flow very well together.
SUPPORT - Follow my progress of my expanded Clue edition -
www.patreon.com/gothicgreenhouse

CluedoKid wrote:I'm not sure if the two styles flow very well together.

Agreed. Wonder if they are going to use the LGE weapons. Either way, the suspects are way too different than the rest of the artwork, despite their effort to unify it with the same beige background which they similarly used on the LGE cards. And if they do use the 1949 weapons art, then there's the problem with the butter knife not matching the tokens. Correction, looking closer at the photo, it appears they are using the 1949 weapons cards, which will really look out of place with the board art.

Do some of the weapons on the picture of the board look like antiqued-brass? The revolver "pistol" token looks like the standard pewter, but it looks like brass on the box cover. Perhaps the board photo is just a photoshopped prototype?

All things considered, I think they should have created some new suspect art for the game, or mixed and matched the best of the '86, '92 and UK 2000 games (assuming the Struzan art is not available â€“ interesting note, Winning Moves is still selling the card game with the Struzan art).

Also, notice how the ad shot of the new game is almost identical to the shot they used for the 1949 reproduction: 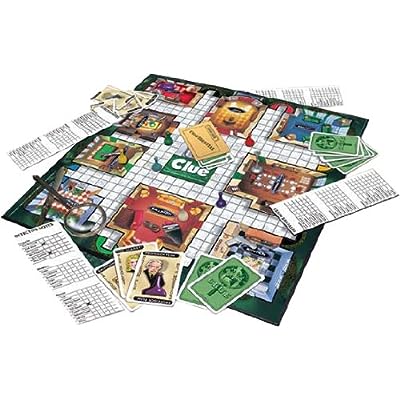 The pawn heading to the library looks like a master detective one.

I'm facing a possible relocation, though, so can't add it to my collection just yet.

I'm not sure - as others have said - about the '49 cards with the modern board. How is that "classic"?
How do you know what kind of pictures they are if you're such a lay-dee?
Top

Michael wrote: the '49 cards with the modern board. How is that "classic"?

I think they mean "classic" in the sense that it uses the original 6 characters with the original 6 weapons and original 9 rooms. Hasbro did the same thing with the 2002-based video game "Clue Classic" which came out in June 2008, presumably so as not to be confused with the reinvention game they were planning to release a few months later.

Since DTS uses a pistol, it probably would have been a good idea to go back to the standard revolver to further set them apart, but it seems more like Winning Moves just threw together whatever they had in the cupboard to make this Clue-stew (or Cluedo-menudo, LOL).

Good idea, but the more I think about it, it's a kind of fail. Appreciated, but it just misses the mark.
Top

I find the box art to be simply awful.
Top

While I do prefer pre-DTS art and design, this edition is a hodgepodge of varying designs that resembles a game you find in a house where people take missing cards to make a full set rather than an ecletic game.
Top

Quadsworth wrote:I find the box art to be simply awful.

Agreed. Like the game, it doesn't quite know what it wants to be. It's a real throwback to the uninspired UK Cluedo boxes from 1965-1999. Especially the cluttered feel that the UK 1996 box had. It doesn't inspire any atmosphere. 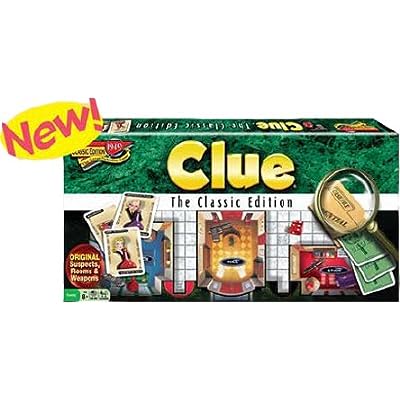 It looks quite nice. I'm just glad that this has been released instead of more Reinvention garbage.
Top

I wonder if it has already come out to stores? I'm going to meijers tomorrow, so I'll check.

Oh my, wouldn't that be wonderful to have?

Mind you I hate the suspect cards, but they're a step up from the deinvention.
http://www.facebook.com/#!/profile.php?id=672942747
Top

As a collector it makes sense, but if you already have any of the 96-2003 boards, you have this game. Especially if you have the LGE or the 1999 European Cluedo edition which is the exact same board.

munitzer is right, use any cards you like with any of those other boards and you basically have the same hodge-podge looking game.

The ONLY redeeming thing I can see about this particular edition is if the weapons tokens are in fact bronzed versions of the LGE & 1949 gold and pewter tokens, as depicted on the box cover. These would be the only other ones besides the MD edition of which I'm aware (and the only ones of this design), and worth having. Otherwise, meh.

But don't get me wrong, better this is available to those who do not own any Clue game, especially those who are replacing one from childhood. As much as I'm happy the Nostalgia edition selling at Target seems to have become a staple, the 1960s edition is no substitute for the original concept.

I agree with Michael's assessment of the the 1949 re-issue which is applicable: there is nothing here that cannot be had in an original nicer-looking published edition, readily available on eBay, often for considerably less â€“ with the added benefit of having real nostalgic authenticity.

But The White Pawn is right, this will hopefully pave the way for other "Classic" editions. Winning Moves does not sell their games in Europe, so surely there will be at least a European manufacturer who will produce a "Classic" Cluedo edition (and do a better job in the process). Though I suspect "Classic" may be a Clue trademark which may only be licensed exclusively to one vendor per territory at a time, and I suspect Hasbro will want to keep a tight lid on the number of those licenses to keep the Classic games from causing undo confusion or otherwise cut into their main Clue:DTS marketing and profits.
Last edited by Murder by Death on Sun Feb 07, 2010 9:03 pm, edited 1 time in total.
Top

I like it! I'll have to add this to my Birthday List. I agree that the two styles look a little strange, together, but maybe it works better in-person (?). Either way, I'm happy to see the classic CLUE game (and logo!) resurface in a world of DTS, and similarly designed spin-offs.
"But look what happened to the cook!"
Top

The board is great, but the cards are hideous in my opinion. And as CluedoKid said, the two styles don't flow together. But I congragulate Winning Moves for keeping the original Clue alive.
Top

I also think that the dirty white background of the cards looks bad in contrast to the more vivid colors of the board.
How do you know what kind of pictures they are if you're such a lay-dee?
Top

Michael wrote:I also think that the dirty white background of the cards looks bad in contrast to the more vivid colors of the board.

Did you feel the same way about the LGE & 50th Anniversary? The approach is very similar, though they both had a more textured beige background color like marble or wood, which fit better with the richness of the board. More importantly, the artwork on the cards was as vibrant as the board, making the background color of the cards irrelevant â€“Â though notice that the LGE & 50th cards compliment the board tiles, which looks nicer than the contrast the Classic edition has set up. That beige matches nothing! But NOTICE how much better it looks with just darker board tiles and card backs in my mock-up? And would it have hurt them to print the detective notes brown on off-white to tie in better as I have done below?

I think the bigger problem is that the 1949 artwork is flat and the colors seem dull compared to the board and rooms. So it's a bit like hanging some Lichtenstein pop art next to the Mona Lisa, it doesn't matter what color the walls are, they just don't look right next to each other. I think the same thing can be said for the card backs as well, and that green matches nothing either. Why not just use the LGE art in green?

Could it be Winning Moves is saving the LGE design elements for a deluxe re-issue?