Marchioness Emmeline Maple was always the talk of the town — or the entirety of Britain, that is. Whether the canards were about the gaudy color of the fascinator she wore at the most prestigious derby of the season, or about her rejection of the extravagant proposal orchestrated by a peer of the realm, it was a guarantee that there was some gossip about her to be wrung from the conversation. All things considered, she was a wonderful person. She gave alms to the poor, lauded the women's empowerment movement, and was the antithesis of someone who would dabble in tax evasion. But a lady who had done nothing wrong was one who had done something wrong, and it was the duty of her fellow nation to ascertain some fatal flaw. A flaw that wasn't just a critique of her fashion choice or taste in men, but one that would be able to shut her up for good.

But what was it that made her public enemy number one? Most would attribute it to her optimism. Her exuberance. Or her deception, as some liked to call it. Whenever she was in the room, the conversations were more jovial and the laughter — rare as it already was — was for once seemingly genuine. Her saccharine smile and her quasi-ubiquitous glee at everything life had to offer drove her "friends" insane. Even when her manor was broken into by common burglars who wanted to elicit an outburst from her or when Marquess Maple died, she retained her brilliant smile, much to the vexation of, frankly, every single person. And Marquess Maple just happened to invite every single person who loathed her to her cottage for a soirée that she deemed “the ball to end all balls”.

Her latest party at her summer cottage was, to the untrained eye, flawless: it was an affair that was planned to the last detail, from the decision of which societal figure would mingle with which societal figure to the number of ice cubes in each cocktail she would serve. Yet there was always something to scrutinize about everything. In the eyes of the aristocracy, anything that tried to be perfect was a failure at most. The potatoes au gratin should have used russet potatoes instead of Yukon Gold, and that was excusing the fact that there was gratin in the first place. On top of that, the vermilion curtains and Roman chamomile garlands were a touch too bucolic for her guests. Such moves would be condoned if the marchioness were of a lower social preeminence, like a farmer, or a teacher, or even a baroness for that matter. But she wasn't.

No matter what the marchioness did, no matter how positive she was, she just wasn't good enough. And she had to realize this sooner or later. Fortunately for most and unfortunately for few, an unknown assailant did high society a favor and ended Marchioness Maple's life at her resplendent summer manor.

I know that times are rather rough right now, and we haven't had a forum-wide Clue game for quite some time now, so I put two and two together and decided that now's a better time than never to have one. I'll post the basic rules for those who don't know later (because it's 4:13 AM right now and I'd prefer to sleep), but the basic gist is just for you guys to create two characters, two weapons, and two rooms that are suspected in Marchioness Maple's murder. Once we have enough players (and, by extension, components to the mystery), a solution will be randomized and we'll go in random turn order, and the game will be afoot!

Now this is gonna be great! I just woke up so I'll post my stuff in a bit if that's cool
Top

Mr. Miles Meadow-Brook - The Family Lawyer to the Maple family, he also represents many other wealthy families - He knows how to handle his families affairs

Sir Tony Maple - The Marchioness' Son and Heir (at least for now) A playboy degenerate who spends way too much time driving faster cars and dating faster women, he has a weakness for nearly every vice

Pistol - Registered in the name of Miles Meadow-Brook, he always carries it around just for protection, mysteriously went missing before the Marchioness met her fate

Champagne Bottle - Opened on the day of the murder and now completely empty, didn't come from the household's personal stock so must have came from the outside

Cloak Room - Bigger than one would have originally imagined but it's the perfect place to hang your hat, coats and scarves as well as a dead body

Courtyard - The front entrance area of the mansion, nearly everyone walked through here and the Marchioness will be carried out
Top

I don’t know if I’m gonna play, but I have some ideas for characters, weapons and rooms.

It would be awesome if you played! More players would always be appreciated, plus it won't be too time-consuming. I don't have any specifics regarding the setting, but I would say modern-day England, based on what I've written.
Top 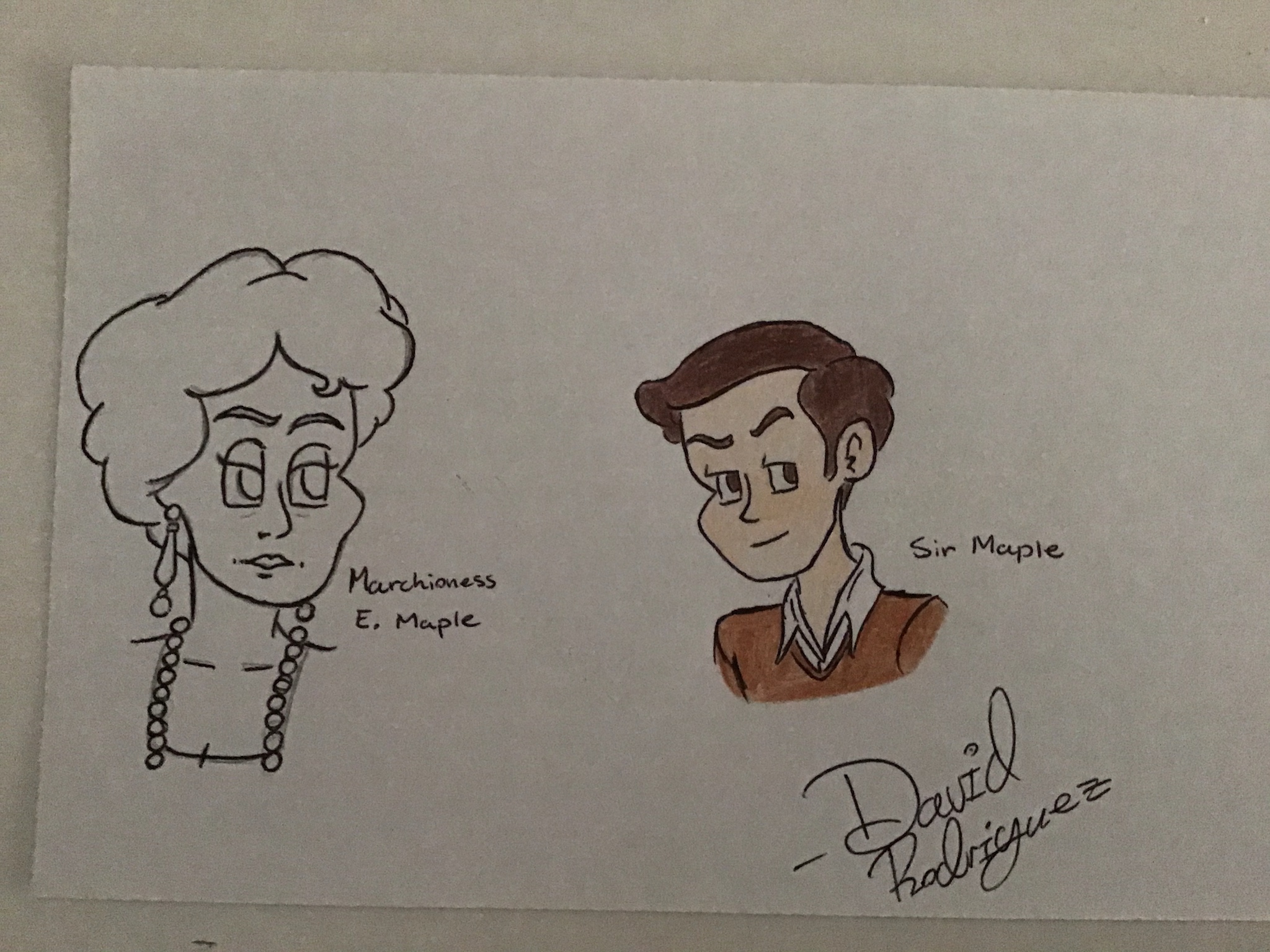 That would be great! Obviously, you're not obligated to do so, but if you do want to, take all time you need.

That would be great! Obviously, you're not obligated to do so, but if you do want to, take all time you need.

Awesome! All I need is just everyone who’s playing to summit their characters and I’ll get started!

Sir Shamrock- A man with a mysterious pass and a different story for anyone who asks. Always manages to be in the wrong place at wrong time, can't seem to remember the last time a party didn't end in disaster. As for the latest party, he wasn't necessarily "invited". Did he invite himself over for murder?

Lady Silver- Aptly named, she feels like she's been in second place her entire life. Always in the shadows of the "perfect" Marchioness Maple, whatever she did, her neighbor would do better. Though, her motives were not as pure as that of Maple's. Could gray be the color of envy and wrath?

Portrait Room- Known throughout the town as "museum quality", this room proudly displays artwork from various notable artists. On one of the walls are the photos of the dearly departed in the Maple family. Who is responsible for the Marchioness's?

Ball Room- Echos of previous gatherings still can be heard throughout the walls. The windows show off the beautiful gardens of the grounds. Could the room know for its life to the party be a part of the death of the Marchioness?

Cake Knife- Used in several parties, galas, and halls, this has been put to great use. Did this serve more than just desserts?

Fire Poker- Part of a set found by the fire place. Both blunt and sharp.
Top

Felicity Lemon - Former secretary and personal assistant to Hercules Poirot, she has seen both the inside and the outside of dozens of crimes. Did she put her past experiences to use in devising the perfect murder? And how did she end up invited to the chateau?

Lord Alfred Grey - One of Emmeline Maple's spurred former lovers, he has since joined British Intelligence and was assigned to her as a personal security. Did he try to keep her safe...?

Hatpin - The perfect feminine weapon that no woman would ever use to murder someone with...

Holly Berries - perhaps added to a salad for the unsuspecting victim to ingest.

Priest Nook - A hidden hole designed to shelter priests during times of persecution. It would be the perfect place to hide a body, but could it have been where Emmeline Maple's met her last rites?

Butler Pantry - Another small room designed keep hundreds of items. Is it keeping a secret?
Top

Roman de Fauvel - is about as dandy as they come. His age obscured through a layer of pancake make-up, his flamboyant character made him one of those people you can invite to guarantee your socialite party hits off. But what is he hiding besides his age?

Chrissy Ruby - Marchioness Maple's bubbly niece. Barely mature at 21, she has taken a shine to fast cars and fast casino play. Is she as innocent as she looks or did her financial mismanagement catch up with her?

Stapler - Left behind by the workmen who fixed the wooden panelling in the tea house, this is one that would take a bit of time to use - but can cause a lot of pain...

Statuette - The trusty cherub that overlooks the collectibles room was salvaged for a church, but was that crack there before?

Tea House - A romantic little hexacon-shaped wooden construction over the pond, perfect for moon-gazing or a wedding proposal... but also conveniently out of sight from the main building to have some privacy... or...

Collectibles Room - Where a number of curious items are stored, an antiques dealer could die happy here...
Top

I see the Marchioness' Son has been a bad influence on Miss Ruby.
Top

Speaking of which, what do you think of my interpretation of him?

Some rough sketches on the characters... 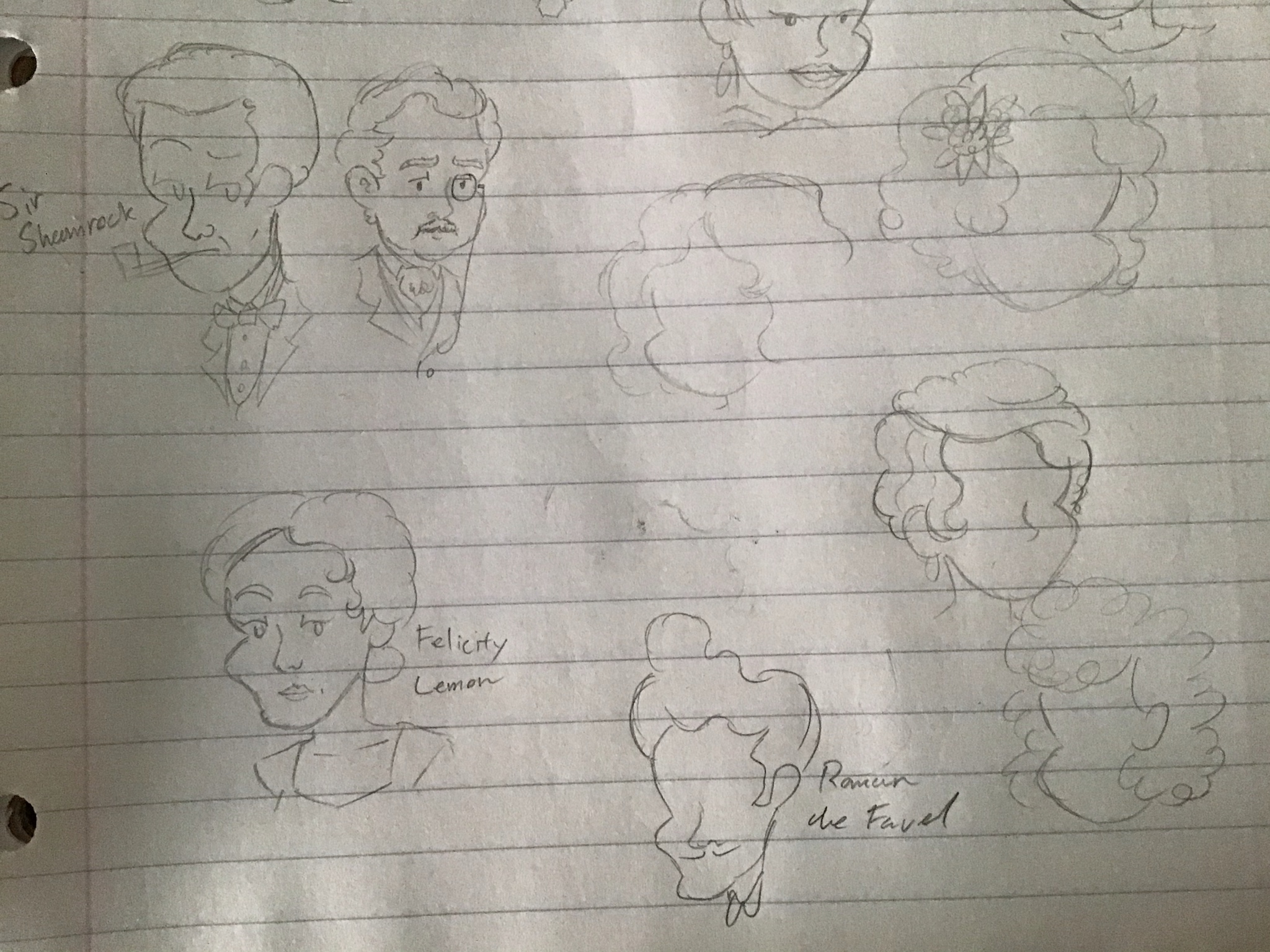 Gu He-Ran ("Sunshine") - Marchioness Maple's Korean maid who, after realising she couldn't call her by proper name, opted to call her the much prettier name of Sunshine.

Ice Pick - found lying on the side in the Kitchen.

Kitchen - the olde-worlde style country kitchen found at the rear of the cottage.

Ornamental Pond - a rather grand feature of the cottage's expansive grounds.
Top 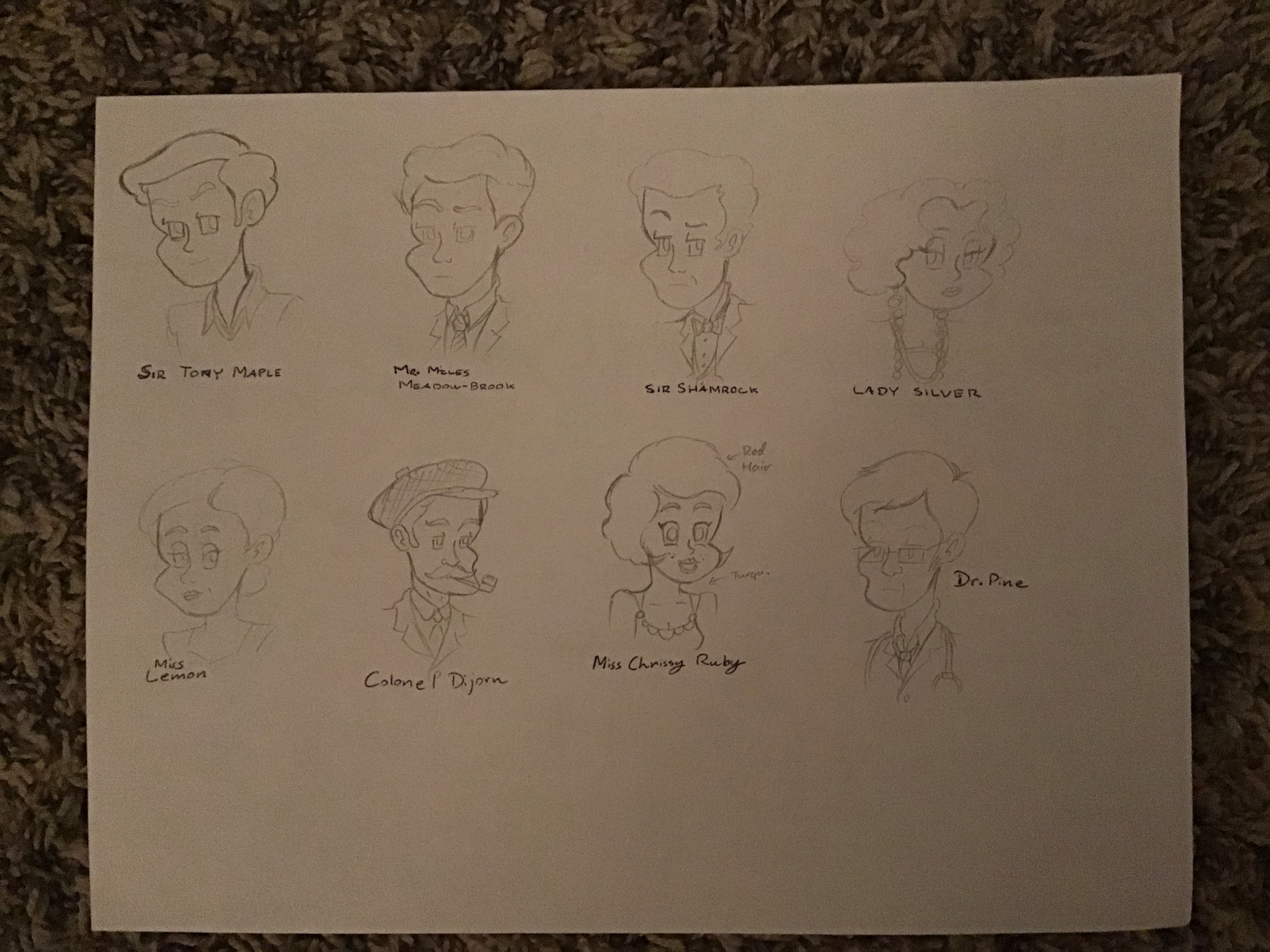 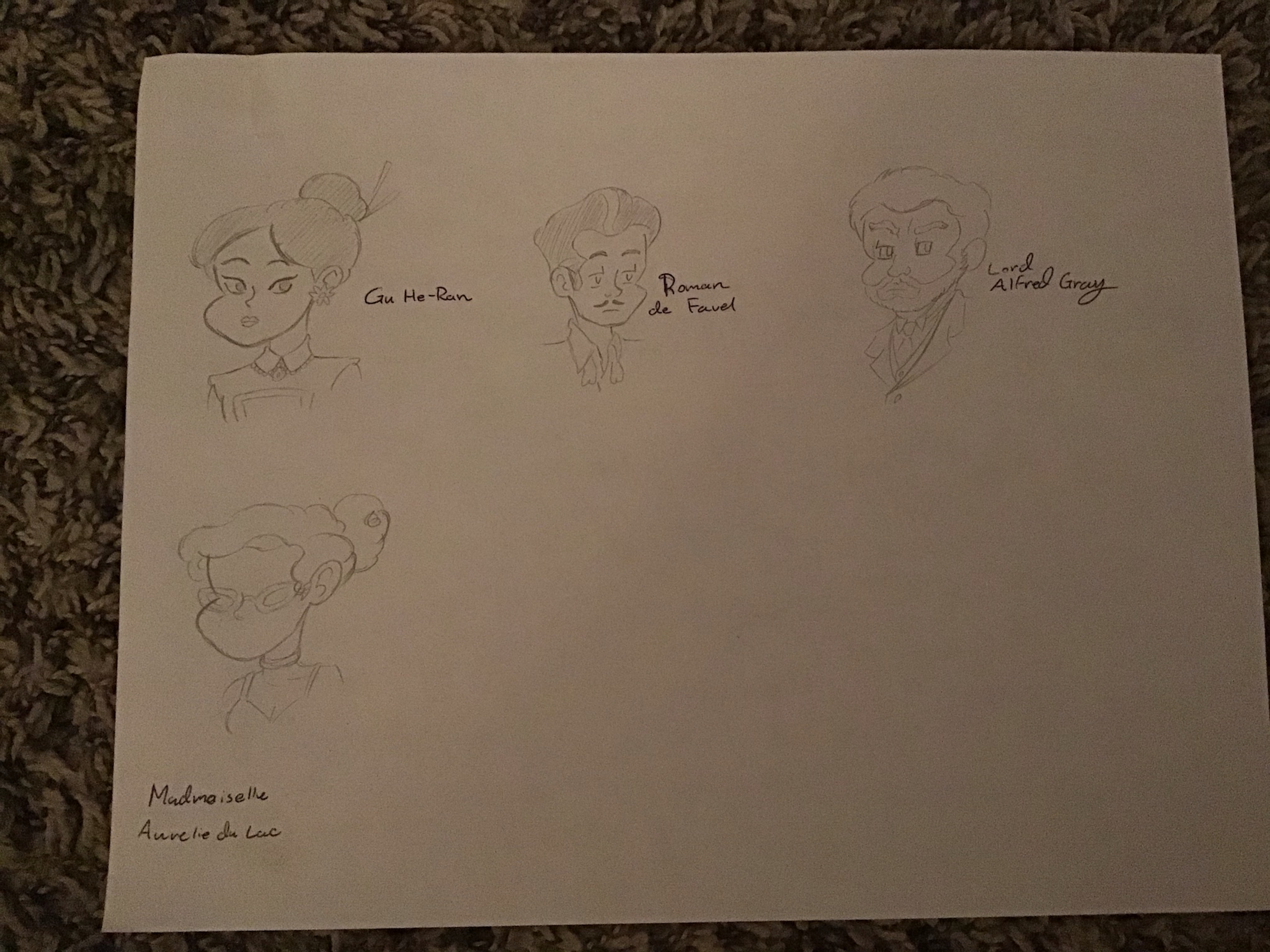 Don’t know if I can write more, but I have more ideas.

Vicar Stones: The pastor of the village near the Maple estate.
Professor Grapes: A college professor writing a book on the history of the Maple Family.

Vicar Stones: The pastor of the village near the Maple estate.
Professor Grapes: A college professor writing a book on the history of the Maple Family.

I'll allow it if a few people are okay with it. Once they confirm it, the game will start!
Top
Post Reply
173 posts