I was previously unaware of these games, but looking at the other editions, they appear to be substantial, high quality travel games, with a reasonable price. Still surprising to see physical travel games given the wide spread use of phone and tablet apps.

Now we all can say good bye to that Clue DTS to-go game! Thank God!

I wonder if this will come to the States or just be a UK thing?
Top

It appears to have an actual Road Trip Theme as well as brand new art.

There’s road trip themed locations, like a restaurant, a bar, a gift shop, and hotel room; and there appear to be new weapons— luggage, champagne bottle, and maybe a pillow. Scarlett has some great new portraiture. There also appears to be some new play mechanisms. The center has pegs and holes for all suspects, weapons and locations. And there appear to be only 7 locations.

I’m excited for this game to come to the US. Note the marketing photos are of “Clue” on this Italian site. But all other sites are Cluedo, and various languages. But I can’t find a single US retailer website that lists the Clue version.

ok now i'm excited! new art, new location, and a new version of Orchid that isn't a parody/knock off. Can't wait to see all of the new cards.
Top

I would've chosen different weapons for the game. (I don't know what. I haven't thought about it properly.)
Top

Looks like the same artist of Clue 2016 is doing this version.

Well, they’ve clearly designed a Clue version based on the marketing photos. And Clue is primarily North America. So I wonder if portable physical games are less popular in domestic road trips, compared to electronic games? Keep in mind, Marmalade has invested quite a bit in developing Clue, so maybe they don’t want anything competing directly with it on those Summer family road trips. And certainly electronic Clue is available on enough platforms to keep the kids busy in the backseat. So Hasbro is rolling the game out first outside North America where many more languages are needed, and the demand for mobile physical games is higher?

There’s also the fact that Hasbro seems to still have plenty of the Grab and Go versions of Clue available that they need to get rid of before they launch this new one, especially if it’s going to be in the same price range.
Top

If this Battleship game is the same size as Clue then these games are huge. Very different from any other travel games Hasbro has made in the past.

Murder by Death wrote: ↑Sat Jun 15, 2019 8:13 pm If this Battleship game is the same size as Clue then these games are huge. Very different from any other travel games Hasbro has made in the past.

Tell me about it! I went to Wal-Mart two days ago and I went to check if the Clue road trip game was out! It wasn’t there, but I was surprised how massive the other games were. They’re long as my noodle arms!

Posted on the Hasbro site: 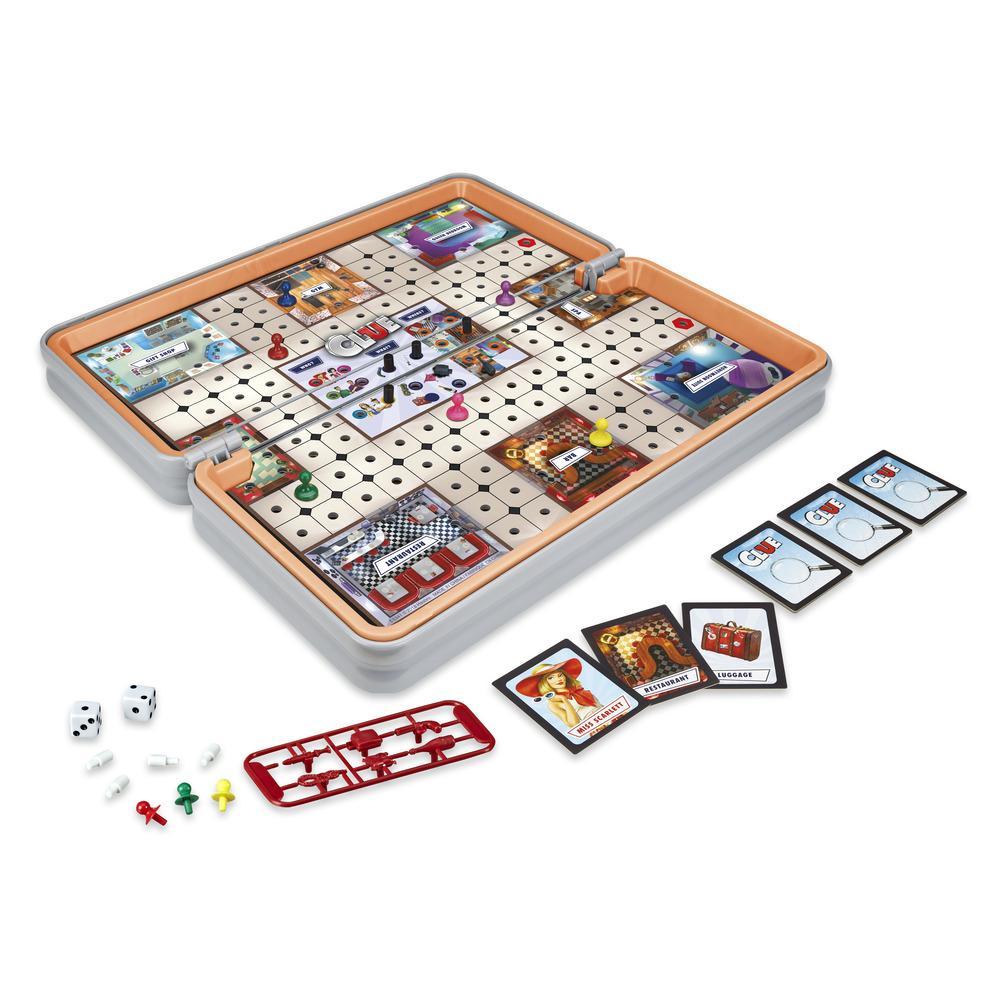 I can’t quite tell what the other Bedroom is, maybe Guest Bedroom, but this game certainly makes up for the lack of bedrooms in clue games over the years.

There also don’t appear to be any secret passages. But Hasbro makes this interesting claim on their website:


With this edition of the popular whodunit game, an exclusive Hasbro Gaming Road Trip rule adds a new twist to gameplay by advancing a player to the room of their choice.

I’ll be very interested to see what this is.

I still don’t know what I assume the starting space room is supposed to be — maybe the front desk? But hopefully we’ll all be finding out soon with this addition to the Hasbro website.
Top 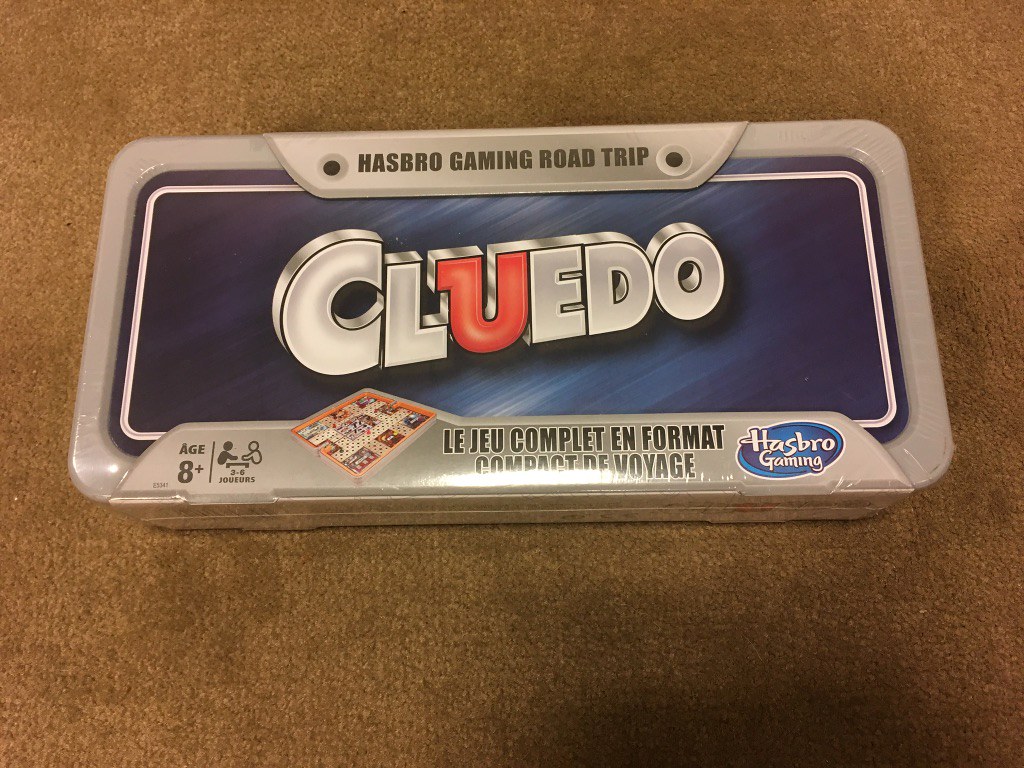 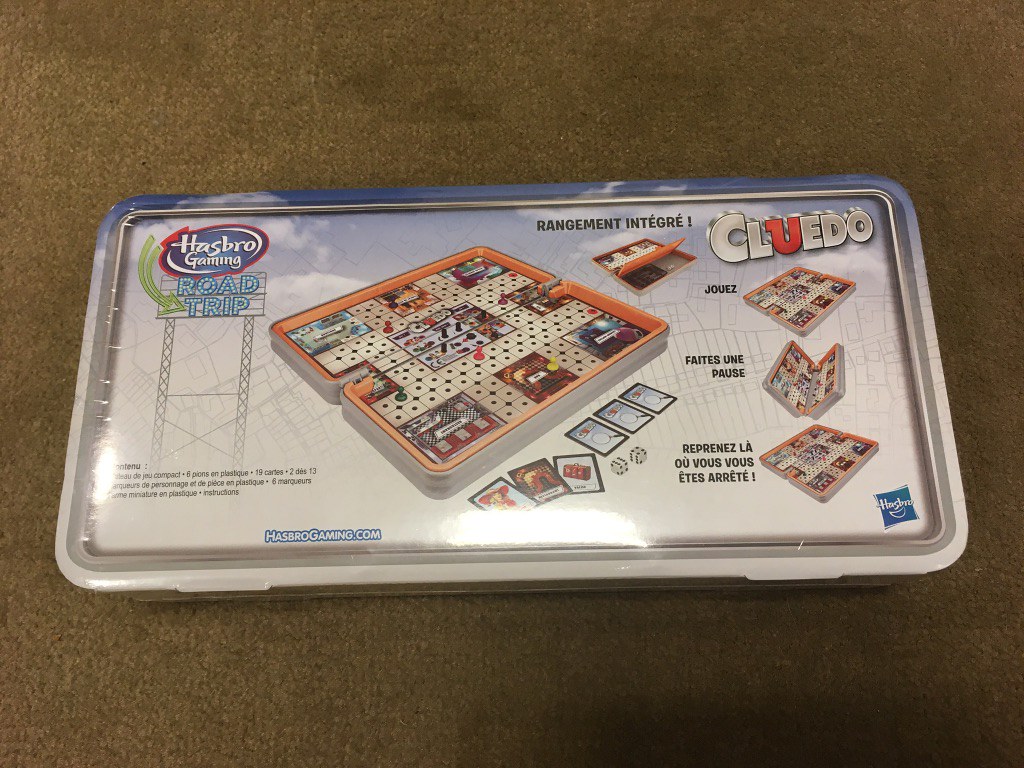 Looking forward to the unboxing - I’ve been interested in seeing more of this game!
Top

I was able to pick up a French edition, which is perfectly fine for me, though I discovered only after I unboxed it that the instructions are extremely important to this edition since it plays slightly differently than regular clue. I'll post the instructions later, and hopefully someone who reads French will offer a translation for the unclear portions of the game.

That said, here's the unboxing:

The case is pretty sturdy. But it snaps open and closed, and requires some effort to pry apart, with no clear grips to assist. 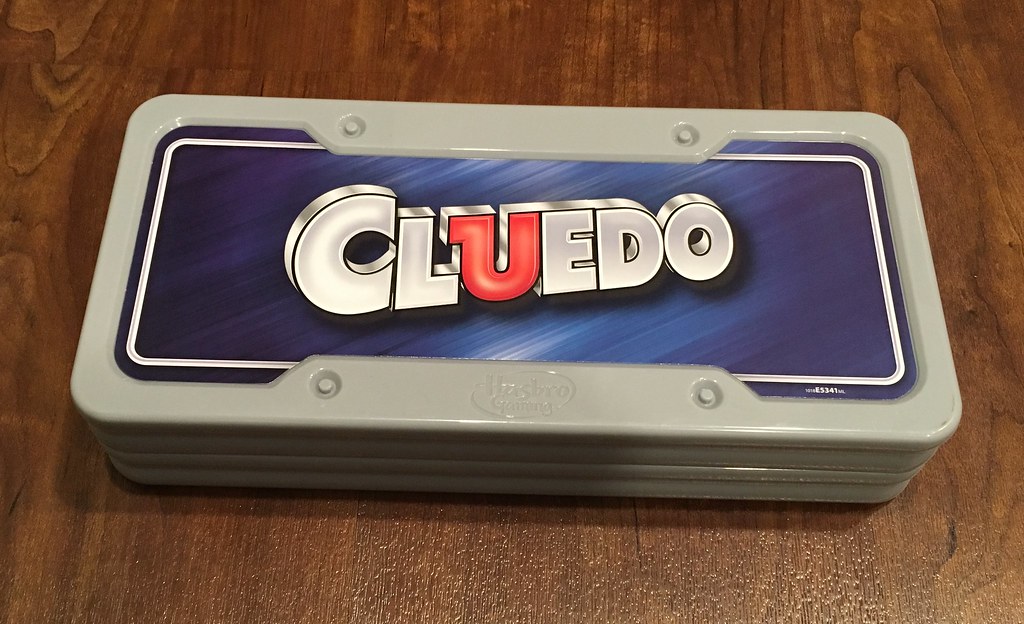 It unfortunately opens upside down. Not a big deal, but it's too bad they didn't flip the board graphics around. But this is a solid game, made of sturdy plastic. Unlike the Grab & Go edition, this will last many years. I do like the choice of the bright orange (which is not clear from the promo shots), as it reminds me of a classic Howard Johnson's roadside hotel. 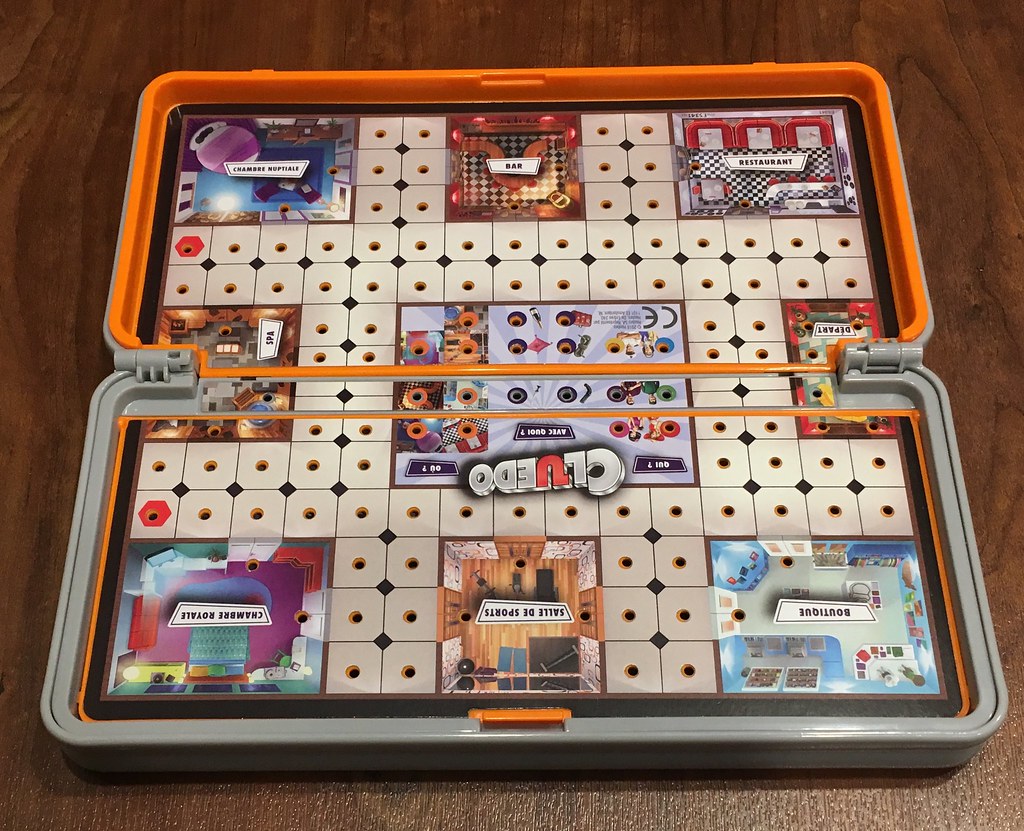 The bottom side has a clip that releases an under tray storage. This is a nice feature, but once all the pieces are inserted on the board, there's very little need for it. There is ample clearance to open and close the board with all the pieces and the dice on it.There don't appear to be any detective notes, and only the instructions and dice don't otherwise adhere to the board. I suppose it's helpful to have a more secure space for any loose parts since the case itself is so hard to open and could lead to unintentionally jettisoning the contents. 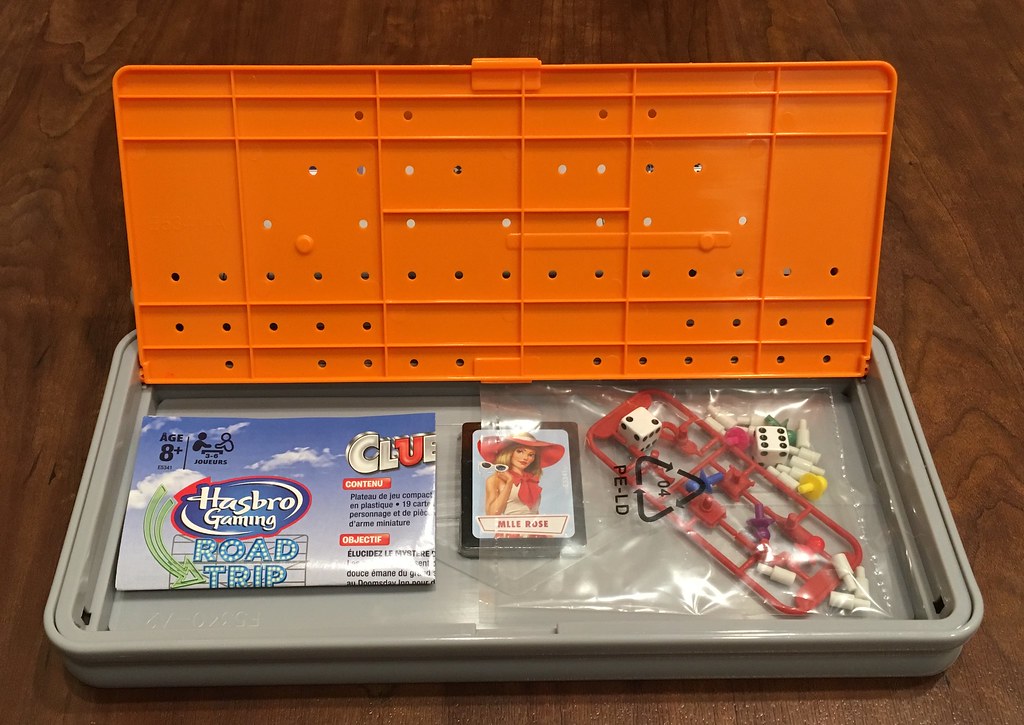 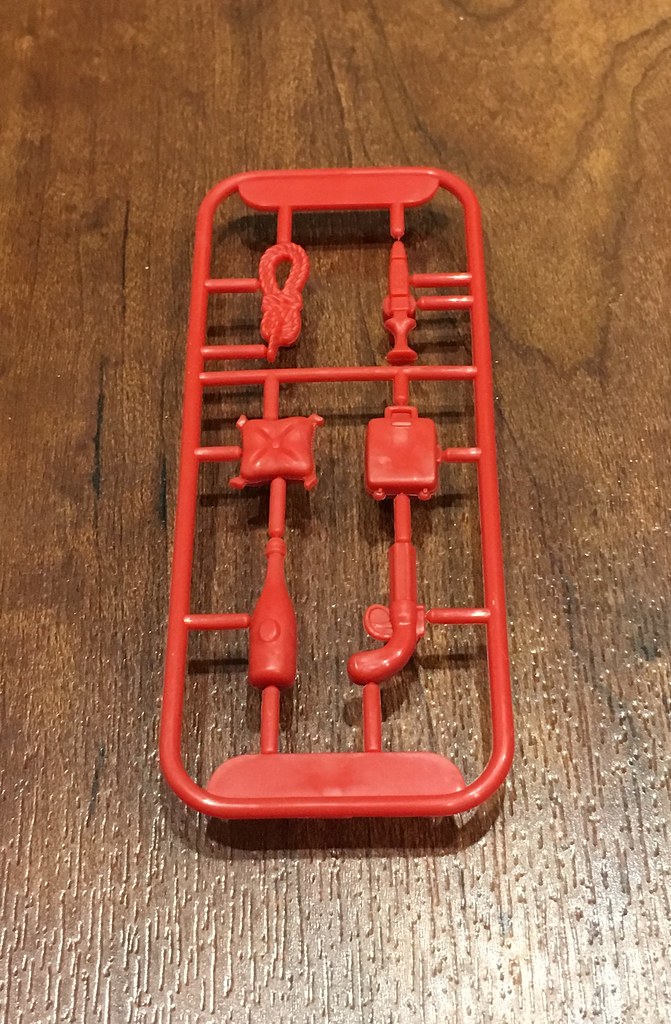 Once in place, the tokens are difficult to move. They've tried to emulate the traditional Clue tokens, but the small head makes them impossible to pull out of the very tight holes on the board. It's best to stick them in loosely. An inverted mushroom type token would have been better for this, as that's basically how the weapons are constructed, and they are relatively easy to remove. The pins -- for which I'm still confused about their use -- are easier to pull, but as smooth cylinders, still difficult to get a grip. 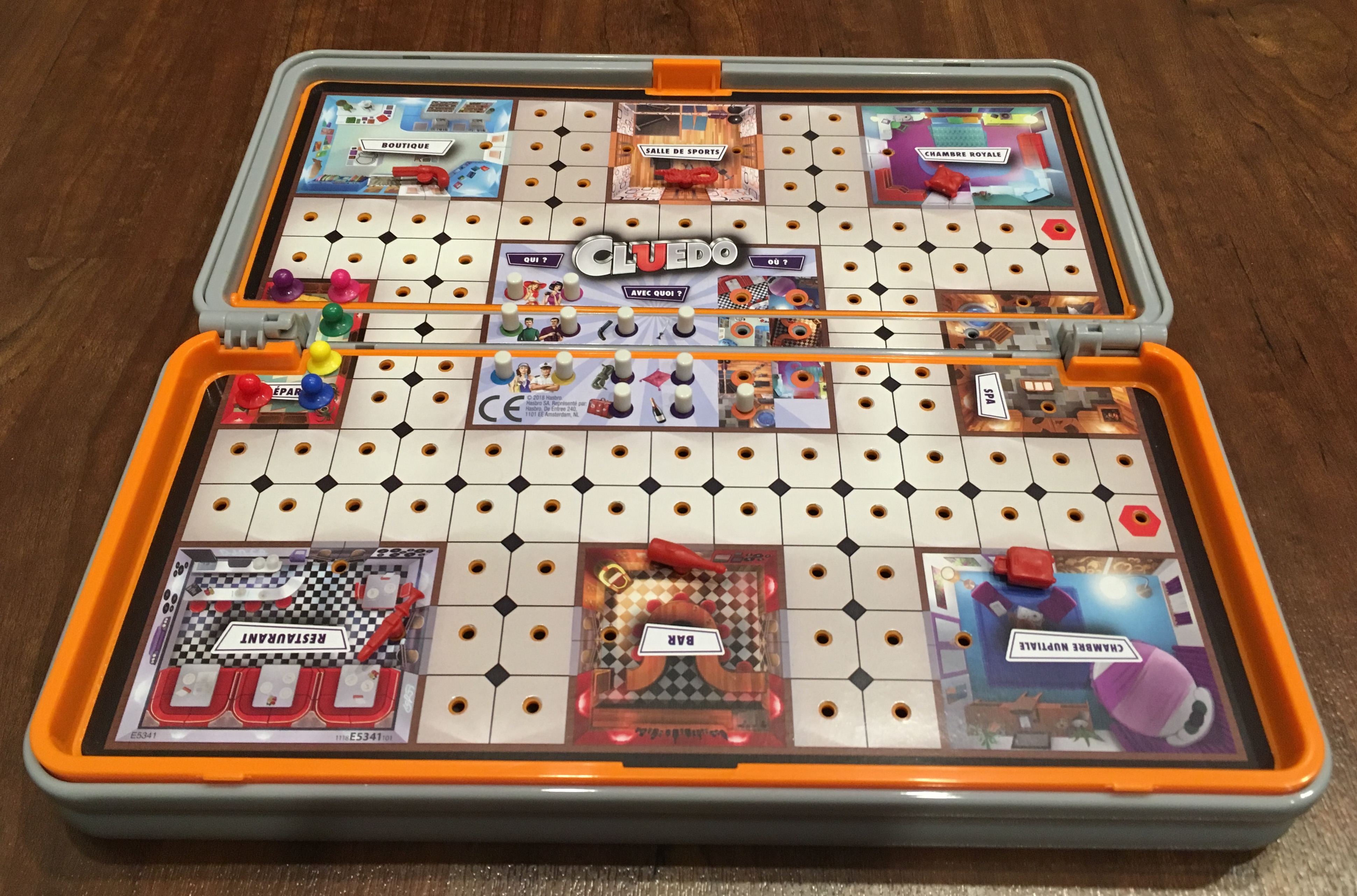 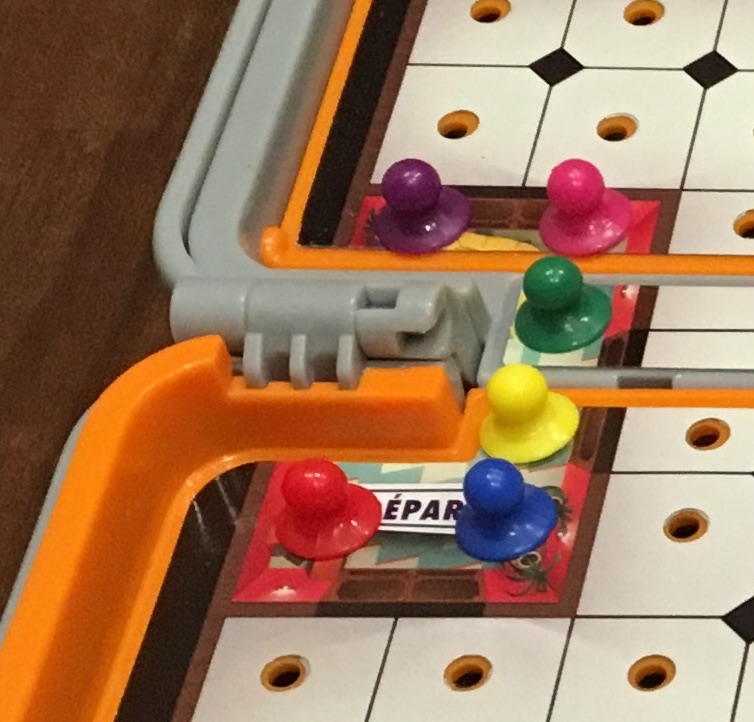 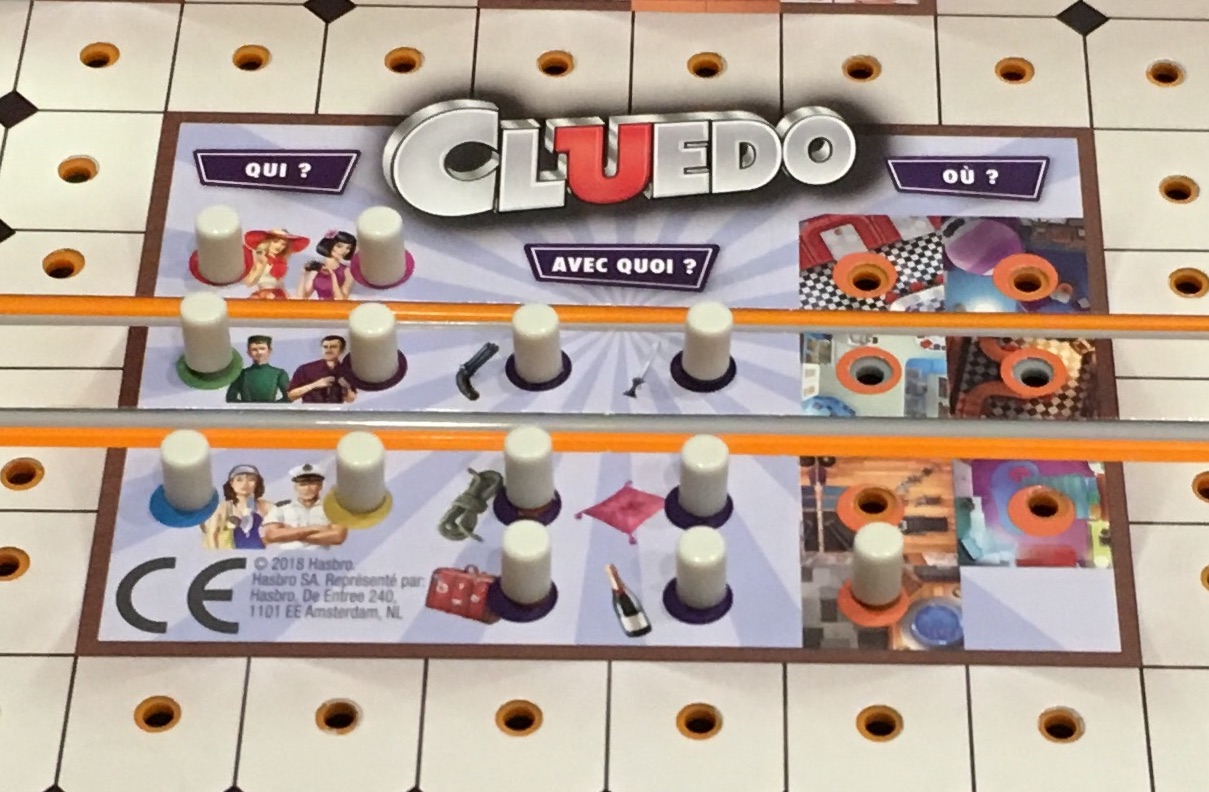 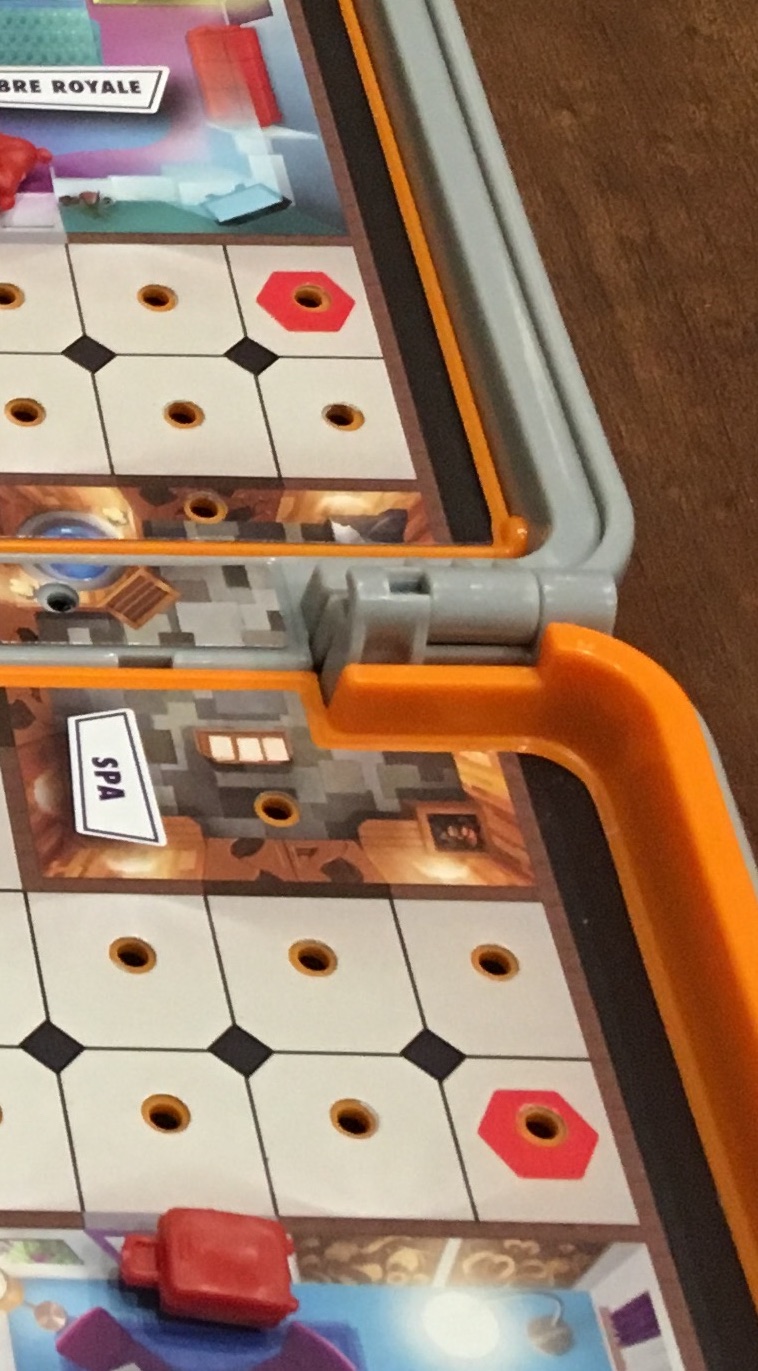 Thank you for the wonderful pictures and the run down on the pieces - I really love that they took the time to create a re-theme of the game that is thematically consistent with the 'Road Trip' concept, really takes the Travel Game concept to an almost meta level!

On a side note, I've been working on a train based Clue card game variant recently and used a couple of the same weapons (the pillow and the luggage) which is kind of cool to see them used in an official game.
Top

And now for the French instructions. I do love the new Road Trip graphics they're using. It's too bad this isn't a higher quality game such that they are sharper and cleaner looking. This is a relatively low resolution printing. Now if only I knew what it said! Actually I think I have an app that will scan and OCR text and translate which I used on the Brazilian Detetive game for voice conversion/translation. 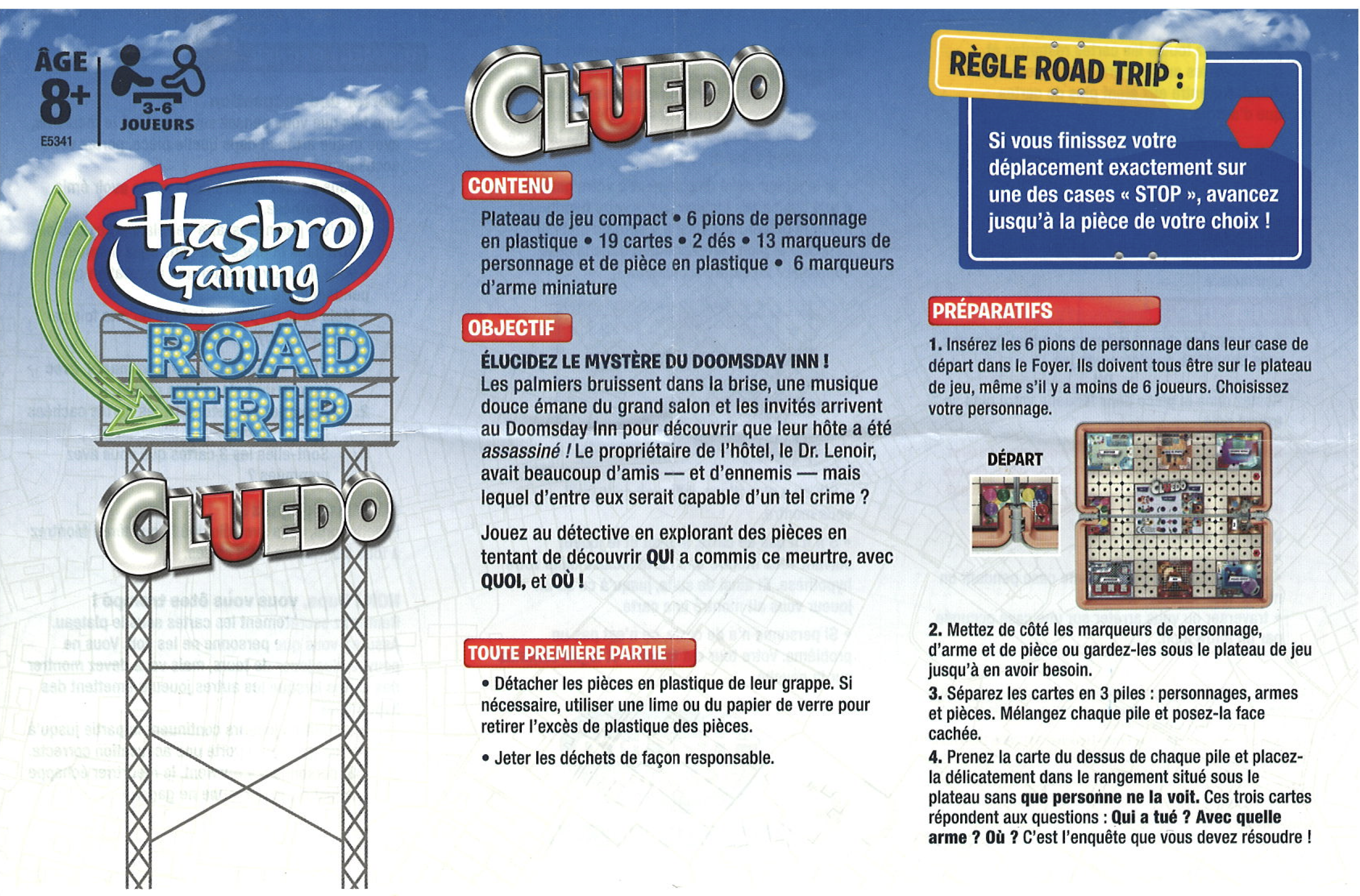 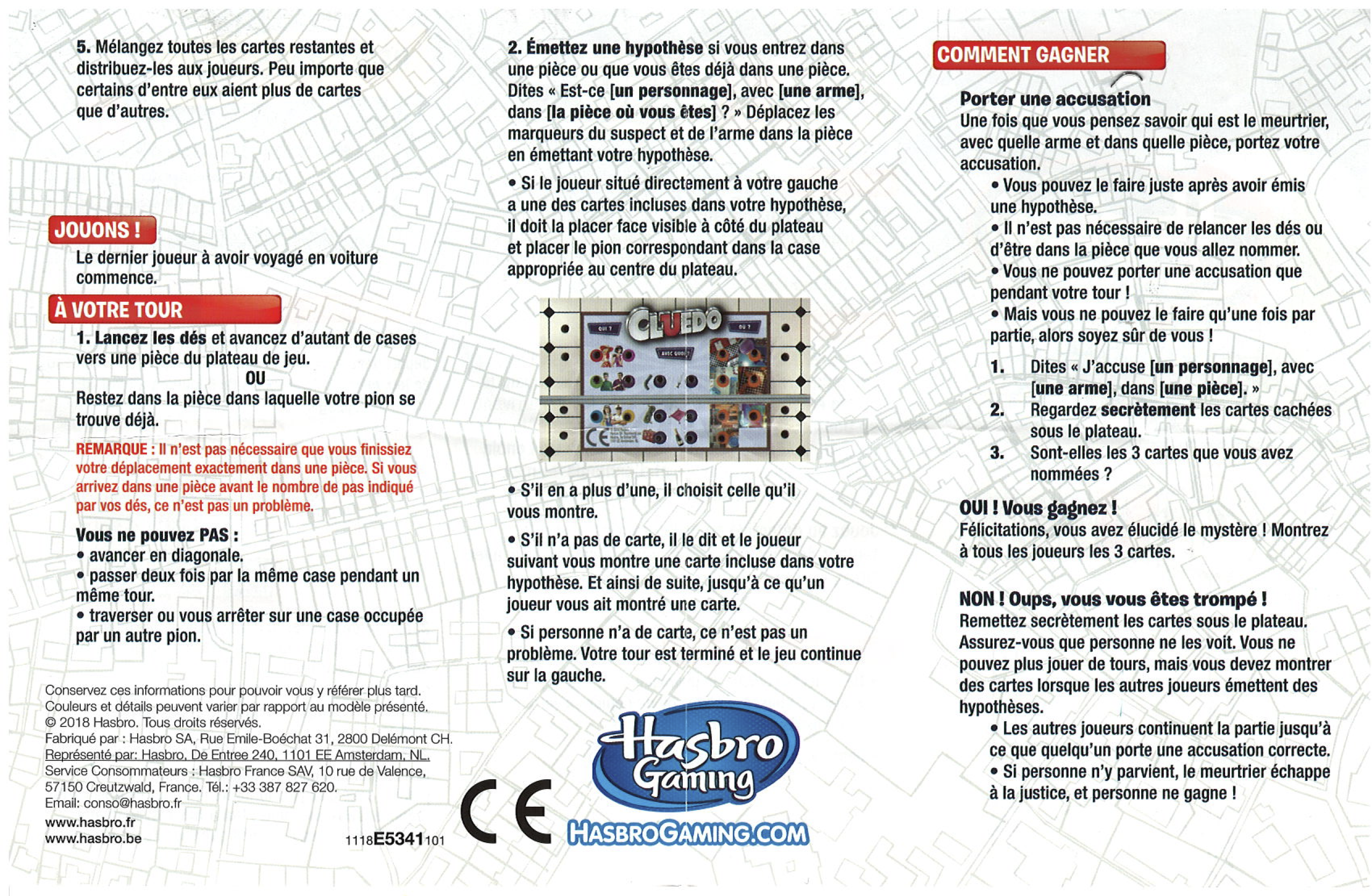 Now for the cards. From a physical standpoint they are a nice thickness and quality for a game this small. I do wish the printing quality was a bit higher, but they still look pretty good.

Where these cards excel are the new Chraracter artwork. I ABSOLUTELY LOVE all the new character looks. They've really captured a moment in time. The rooms art is lifted from the board, and again, it's a lovely adaptation. There are some welcome new weapons, but the originals don't get much of an update, and logically the presence of the pepper-box revolver in a roadside motel is truly baffling. They hit it out of the park with the characters though. I only wish this artwork were normal sized. I'm afraid the print quality is so low that up-resing it won't look that great. 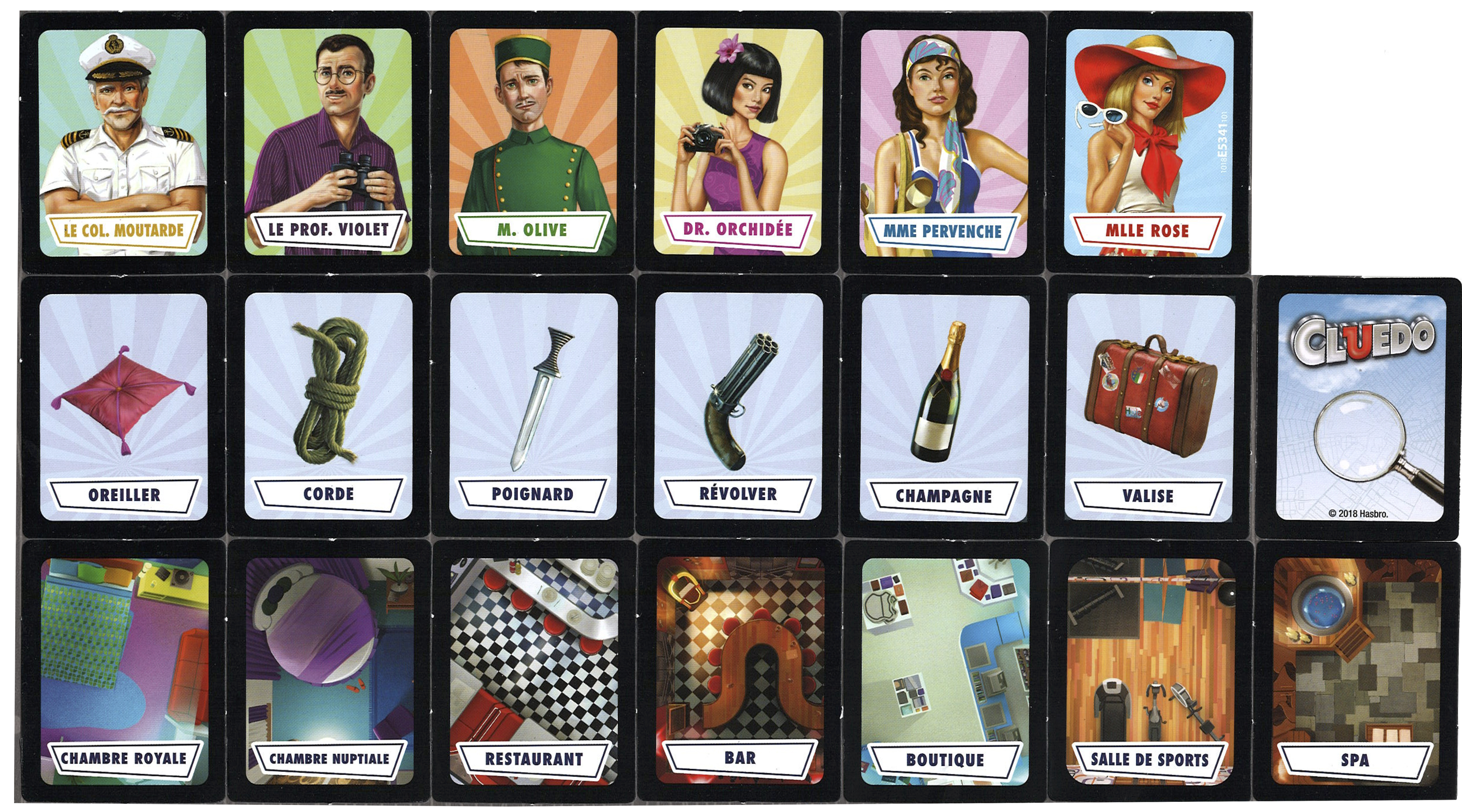 On a final note, this is generally a delightful and well thought out concept from physical design to artwork, and cohesive theme. The missed opportunity was having the suspects not represented by colored automobiles of various designs, but that's almost too much to ask. As pointed out there are a few design flaws with the peg board, and token/pin shapes, that make the game somewhat unpleasant to actually play.

Aside from that, I'm sure the oddities will all make sense once the instructions are translated. That said, a simple set of printed detective notes for this game, the assumption of secret passages in the corner rooms, and this should be as playable as any other edition with the normal rules.

I wish they'd done custom detective notes for this. Maybe on a guest register design? Or a bill from the diner? Oh and I almost forgot there's no Murder envelope. I suppose the murder cards then go into the compartment -- yet another use for the otherwise mostly useless space.
Top

Nice scans! On a quick look, it seems that If you stop on the red spaces you can move to any room that you choose! So it looks like they are a type of secret passage.

I’m not that good at French but can muddle through reading a little bit of it, from trying to read French comics in the past. You should be able to run the whole thing through google translate.
Top

I think this is a great little addition to the Cluedo franchise.
Top
Post Reply
32 posts