cluedoking123 wrote:Miss Scarlet, did you and Honey look for the professor together or did you split up?

Prof Plum, did you ever talk to Parker?

"We went together! He was in the Library finishing setting up the ant traps, isn't that right Pete?"

"I can corroborate that actually. And no, I never actually got to see him."
Top

Cluedoking, you have also earned the right to your first deduction!
Top

Hmm, I'll say Professor Plum with the Trophy in the Dining Room.
Top

J'accuse Honey with the Trophy in the Kitchen
IT'S ALL TOO SHOCKING!

Very interesting, detectives! Let's take a look at the results of the first round of deductions: 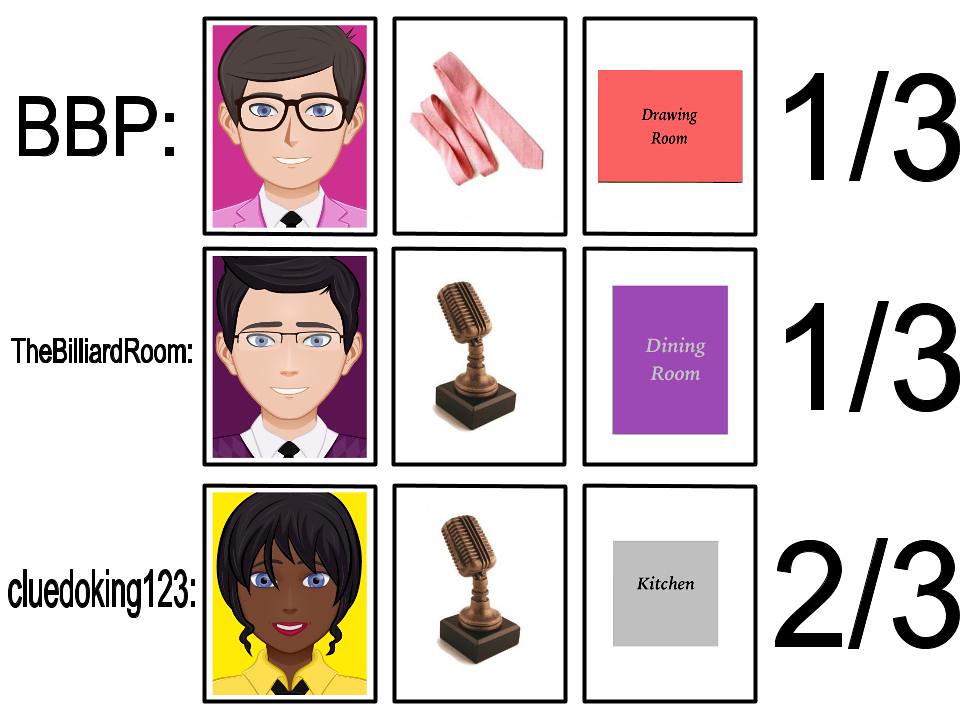 Well done to all of you! You're all certainly on the right track, especially you, cluedoking!

Now, let's have a look at some fresh evidence that's just come in:

Mrs. Peacock hobbled into the Kitchen, once again dropping the large suitcase on the floor.
â€œArg!â€� she cried out. â€œThat is IT! I have HAD IT!â€� With a swift kick, she sent the suitcase drifting across the floor til it screeched to a halt underneath the oak kitchen table.
Pleased with herself, she headed off to the Study.

Professor Plum had just laid the last of the ant traps when Miss Scarlet and Honey came in. â€œPete, dear, we have a small favor to ask of you.â€�

â€œAnd what might that be?â€� he asked, getting up from his hands and knees.

â€œCome with us.â€� Honey said in a hushed tone, waving her hand at him to join them in the doorway.

Poison in hand, Plum and the ladies left the room. Miss Scarlet, noticing the paperweight left on the end table, picked it up before heading out with the group.

Dr. Sugarsweet headed inside the house and approached the Study door. Hmm, closed. Curious, he thought to himself. From inside, he could hear a commotion. Mrs. Peacock sounded upset.
â€œBelieve me,â€� she said, "the last thing I need right now is to be lecturing you on how to properly behave rather than going out and mingling with my guests and enjoying myself!â€�
Afterwards, a male voice was heard. â€œMake me!â€�, it said angrily.

Sugarsweet gasped. Parker Azure! The last thing he wanted was to be face to face with that guy. He shuffled quickly away from the door and down the hall, slipping behind the Library door just as Parker was about to pass by. Phew. That was a close call. From down the hall, he could hear his voice, â€œNow whereâ€™d that darn suitcase go?â€�

Now it's Round 2. Each player must ask one question of any suspect before making a deduction in this round. Good luck!
Top

What was that favour you were asked, professor Plum?
Top

BBP wrote:What was that favour you were asked, professor Plum?

"Josephine and Honey asked if I'd help brainstorm a way to frighten Parker off with them. We were planning in the Dining Room, but never actually got to see him."

On the strength of that answer, BBP, your deduction please
Top

Miss Scarlet, why did you take the paperweight?
Top

"I recognized it as one of Liz's from her desk in the Study. I figured Pete must have borrowed it and I took it so I could put it back where it belongs so she wouldn't be upset."

Your turn for another deduction, TheBilliardRoom!
Top

Mrs. Peacock, were did you go after Parker left you in the study?
IT'S ALL TOO SHOCKING!

cluedoking123 wrote:Mrs. Peacock, were did you go after Parker left you in the study?

"I went back outside to the Garden to mingle with my guests."
Top

cluedoking123, you may now make a deduction!
Top

J'accuse Dr Sugarsweet with the Trophy in the Kitchen!
Top

I agree with BR actually. But, I'll be different and say
Honey with the trophy in the drawing room
IT'S ALL TOO SHOCKING!

Dr. Sugarsweet looks around worriedly. "Wha... What? I would never!" 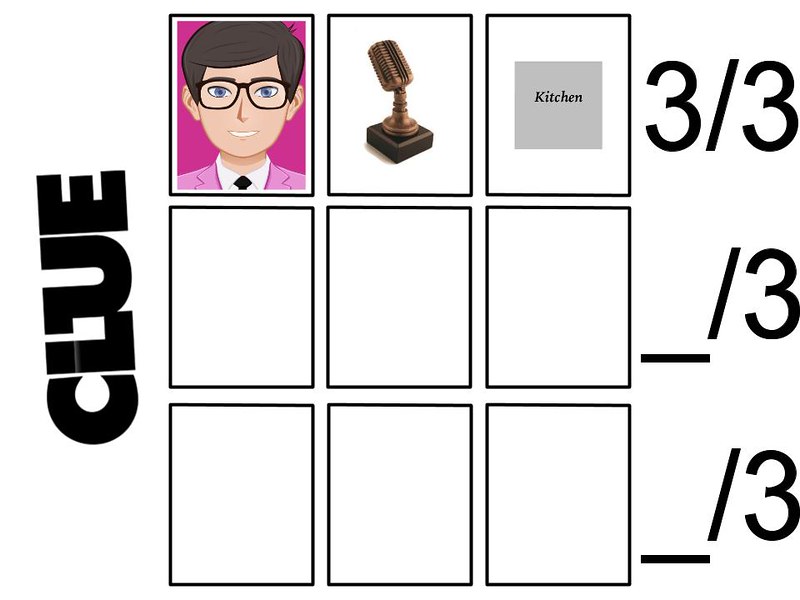 It WAS Dr. Sugarsweet with the trophy in the Kitchen!

Well.. I guess you caught me. As soon as I laid my eyes on that trophy a whole sea of memories just came rushing back. I had never felt so robbed or.. or envious in all my life! I decided I had to have another look at that trophy. I really didn't mean to hurt the guy, I swear. It just kind of.. turned out that way.

I went back inside to talk to Mrs. Peacock, but as soon as I heard Parker's voice coming from the Study I was petrified. The last thing I wanted to do was face him, so I hurried behind the Library door before he came out. When I overheard that he had lost his suitcase, I figured that was my ticket to finding the trophy. So off I went.

As I passed through the Kitchen, I noticed the case shoved underneath the table. Odd, I thought, but who cares, I found the darn thing! I bent down and rummaged around a bit til I removed the trophy. It was so beautiful. As I was examining it, he came in and started yelling at me, calling me a thief. He thought I was trying to steal the d@mn thing! Well, he lunged at me, and I panicked. The next thing I knew the hand holding the trophy swung at him, and, well...

I didn't want to kill him. You'll have to believe me! But I don't regret it. You should all be thanking me..

Congrats to all of the detectives for more or less reaching the solution at the last moment, but big congrats to TheBilliardRoom for being the very first to come upon the real solution!

Thanks for playing along, guys! Hope you enjoyed it

Congrats TBR!
Thank you very much for the game, CluedoAuthor12!
Top

So close! Congrats my friend!
Also thanks for hosting! I've missed these! =)
IT'S ALL TOO SHOCKING!

Thanks for the game, it was fun