Can we go to the study?
Top

With Plum in tow, you make your way across the house... ...Past Mrs. Peacock shooting you a death glare for entering her bedroom - I'm sorry, her sleeping quarters - without her permission... ...Past Mister Green handing off the ballerina figurine to Miss Peach... ...And right into the Study. Despite what Mrs. P said, Grey and Mustard don't seem to be here.

Type P4V3_F35T1V4L as the password for the computer
Top

You flip open her laptop, type in that mess of symbols you found in Boddy's notebook, and... After a familiar start up sound, your introduced to Mrs. P's search history. Scratch that - Her completely blank search history. Meh. Now you'll never know if she has any really weird interests that she should really see someone about!

Wait, she didn't delete her bookmarks. Let's see... "P-Mail," "Follows Banks and Investments," and "Rose Tinted Glasses" are all there. As well, there's a little box indicating a drive named "SgtSienna" has been recently inserted.

The flash drive is full of files and photos. Among them is something titled "02115360SUMA..." Whatever that means. You flip it open and start skimming through.

^v^...The body of Lady Olivia Oakwood was found floating in near the northern piers of Santa Rita at around four thirty, April twenty eight, 2013. Area water currents indicate the body likely floated here from her mansion on a private island on the outskirts of the bay area... ...

^v^...Rock spikes were embedded in the victim's back. Signs of blunt force trauma were found on the back of her head, along her spinal column, on her left thigh, and her right lower leg. Preliminaly investigations indicate she fell to her death on the rocks surrounding her island... ...

A mansion on an island outside of Santa Rita surrounded by spiky rocks? Heh, if you didn't know better, that almost sounds like this house!

^v^...Bruises resembling hand prints were found on the front of her chest. Her fiance could not provide an alibi, but his hands were deemed much too large to have left these bruises. A witness reports seeing an east asian woman leaving for the island, but Florian denies her existence... ...

The report ends by saying that there was too little evidence to convict anyone. By all accounts, Olivia seems to have jumped off the cliff on her own. How tragic. You feel just the slightest bit curious, and decide to see what she looked like.

What an elegant lady! Although... What is it about her? Her nose? Her skin? Her hair? Something about her... She looks faintly familiar. You don't think you've seen her before... Just someone very, very similar.

For some reason, Olivia reminds me of Mr. Green...
Top Unsurprisingly, pMail leads straight to Mrs. P's email account. The inbox is full of pointless business related emails, junk mail, and... "Meadowbrook springs retirement village?" All it says is "thank you for sending a question. Our representatives will be sure to send you a response as soon as possible."

You look through her outbox and, sure enough, she seems to have sent email after email to this one place. You decide to flip through a few of them.

^w^...I understand that you offer discounts to US armed forces veterans. I am asking on the behalf of one Colonel Lionel Mustard...

^w^...Please disregard the previous emails regarding the colonel. We have decided not to send him away...

^w^...I do not know how that last message was sent through my account. Please provide the information previously requested ASAP...

^w^...Upon further consideration, Lionel seems as though he would be a detriment to your community. He's a very violent man, and would be liable to harm others...

The *beep* is all that about? What, Mustard's too stingy to send his bony giblets to somewhere people will give him actual medical attention? Stupid old man.

...Dang, some of these emails have got some choice language to them. Geez, you could get him not wanting to go, but you don't understand him seemingly DREADING retirement. What's his deal there? 'Follows Bank'? What a boring name. What a boring logo. What a boring everything. You test 'Rosemary' and 'P4V3_f35T1V4L' for a log in and pass, but it boots you out. Huh. Maybe old Rosie's better with technology than you thought!

This is about five years late, but Zoo977's mention of Rosa Chiffon on the Master Repository reminded me of this thread. I was just curious of what was supposed to occur after this (and who was the killer?).
Top

Wow, it's been five whole years... wow.
I'd have to see if I still have the files somewhere, I'm not even sure I was using this computer when I made this
Stop winking at me, you oversexed Frenchman!
Top

Wow I really like the artwork that was done for this thread!
Top

Well, going through my oldest files to find the art for this was... a *beep* of an archaeological expedition, I found a ton of old clue stuff I'd mostly forgotten about. But I found it, with all my notes. So here goes...

The comments on Scarlet's body, and something Mrs. Peacock told you, were supposed to direct you to the Lounge. The fountain has stopped working. If you search the lounge, you'd find blood splatter on the statue, a bloody wrench Scarlet with Scarlet's blood, and the pendant Scarlet was wearing. 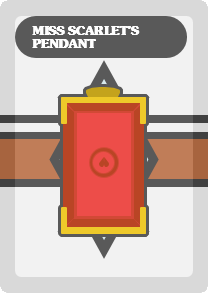 The idea was you would find out everyone's motives in a short time to trigger the next part. In short
- Mustard was going to be shipped to a horrible retirement home and abandoned to live his twilight years in squalor. Hence the angry emails
- Green and Peacock knew about Boddy's affair with Scarlet
- Olivia Oakwood is Plums sister. Grey believes Olivia was strangled, and water decomposition / damage from her fall covered her cause of death. Both want justice served.
- Scarlet helped Boddy cover up the death of Oakwood. Killing Boddy would remove her partner in crime
- Mr. Boddy had a massive fortune, which he would leave to whoever gathered "the keys to his fortune." White was fervent about this, and enlisted Peach to help her with subterfuge.

Sadly, I had only conceptualized the more interesting scene of the game. You would be bludgeoned over the head. Your vision of the mansion would be very dark, and for a short sequence, you would see the suspects as silhouettes of different things and creatures. Green would be a snake, Peacock a massive praying mantis, etc.

You'd basically be forced to go to the Dining room, and you'd see a minotaur run its horns into a porcelain doll, who would then shatter. You would then pass out, and wake up to...

Miss Peach, dead in the dining room. Despite the mess, her purse has been neatly folded next to her body. In her hand, a fork that stabbed her killer.

If you noticed, one of the candelabras now has red candles. These are the minotaur "horns" you saw stab Peach. You would quickly hear about... 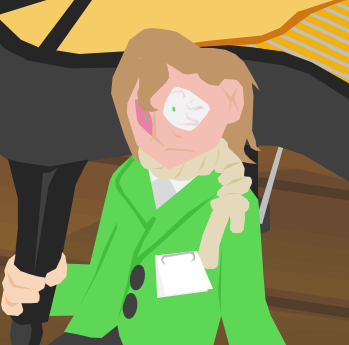 Green is dead in the ballroom. He has a suicide note pinned to him and a noose around his neck... clearly face. His face shows obvious signs of strangulation, and his death-grip on the piano means he was never near the kicked chair in the room. The killer wrote the note to deflect blame from themselves.

If you search him, you'd find a massive clue. 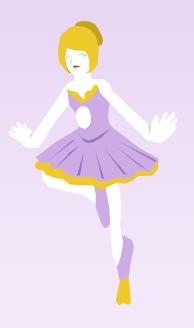 A porcelain ballerina, whose feet end into a heart shape.

When you enter the library, there's now a long dried blood stain on one chair. Scarlet died in the lounge, Green in the ballroom, and Peach in the dining room. Who's left? 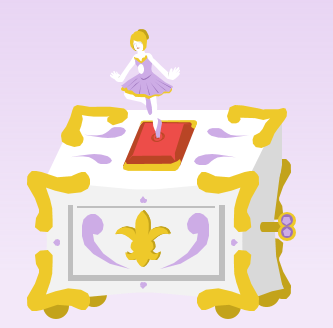 When you fit the music box, ballerina, and garnet together, the drawer opens. Inside is the key to the safe. Unfortunately, the closing assets weren't ever done, but-

Mrs. White would enter. You'd notice her apron was bloody and she had a stab wound in her leg, consistant with the fork. She would suddenly hold you in one arm with a knife to your throat, demanding the key. You oblige... if you can just see what's in the safe.

When you'd enter the hall, Colonel Mustard would appear, holding a pistol to White at the sight of her act. Sergeant Grey would draw his weapon on Mustard - Plum and Peacock would quickly join, holding a pocket pistol and the study shotgun, respectively.

Having all the clues, it would be time to deduce. Much like the Mansion of Dr. Montgomery, you'd have to figure out
*Who did it
*Where
*With what
*Why
for each murder.
Yes, Rosa would kill. Once someone got everything right, the finale would be her shooting the real killer, Plum. And in turn, Rosa getting the fortune in Boddy's safe, as the rightful discoverer. She would split this among Peacock, Mustard, Grey, and White, who would spent the rest of their lives meaninglessly bickering over it. Rosa would do the wise thing and move the *beep* on.

Later, I meant to add an extra murder: 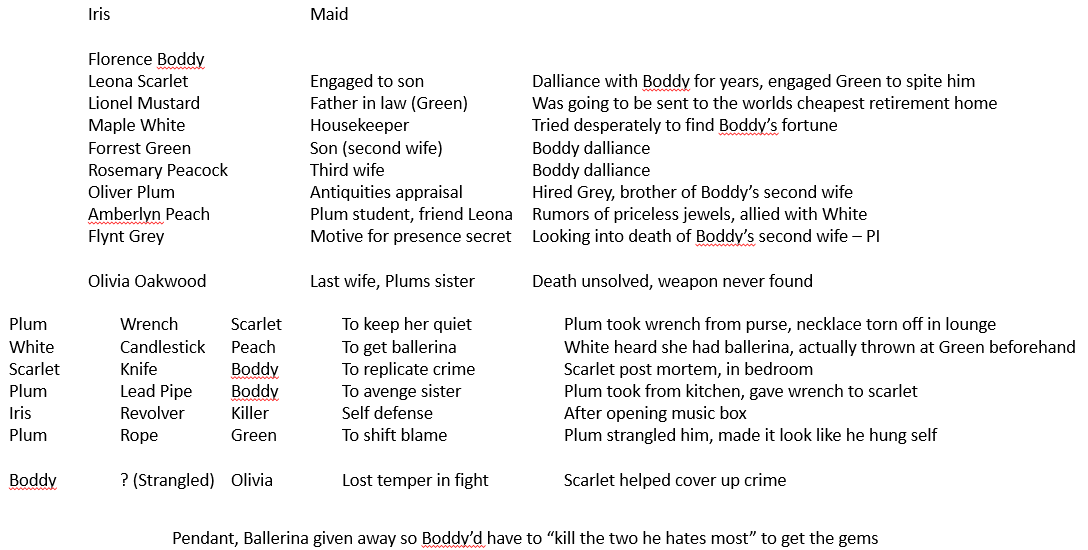 Interestingly, Rosa was apparently named Iris at some point. Perhaps I changed to differentiate her from the cast?

This was an odd rediscovery. I think my problem was I wanted a strict solution, strict steps to get there - I planned this like a straight-shot story, not an open ended story that was supposed to react to the player's actions. But I'm still proud of all the work that went into this. My, how time flies...
Stop winking at me, you oversexed Frenchman!
Top
Post Reply
237 posts