The Art of Murder's Parade of Homes II 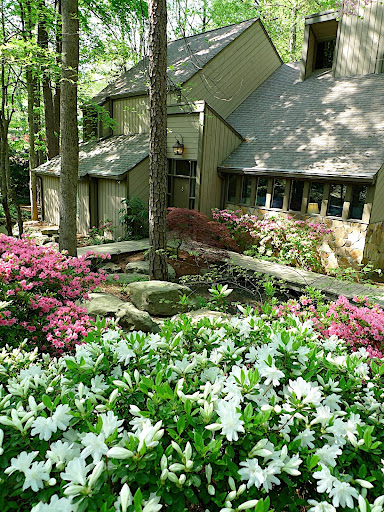 The flowering bushes in front of our new house are starting to bloom. We had the professional inspection done yesterday and there were no major issues with the house, which is great news. I'm getting really antsy to move down there now, but our closing date is only tentatively set at June 7th - still almost 8 weeks away.
How do you know what kind of pictures they are if you're such a lay-dee?
Top

It has a wonderful Frank Lloyd Wright feel. I'm jealous!

Is this the countryside or a really forest-y area of the city?
Top

It's an old established subdivision in Marietta, a suburb of Altanta - about a 25 minute drive to Tum's workplace. (I'm either going to still commute to NYC or look for something down there when we close.) There is A LOT of new construction in the area of really beautiful McMansions, but the developers in almost every instance packed so many houses together (obviously to maximize profit) that they eliminated yards. Most of the new houses have such a small yard and when you look out the windows, you see the neighbors houses right outside your window - front, sides and back. It's ridiculous. Even the true mansions are absurdly close to each other. I absolutely cannot stand that.

When we were shopping around, we knew we wanted to live in an older estabilished neighborhood with a yard. I've spent too many years in in Jersey in a condo. I wanted room to roam! We decided pretty early on that we wanted something with a contemporary style - the traditional houses are a dime a dozen. It was also important to me to have privacy from the neighbors. This house has a pretty big lot - between .5 and 1 acre and it's heavily landscaped. When you look out the windows, you can't really see the neighbors - even out the front windows due to the slope of the hill. I really feel like I can be outside and enjoy the nature solo.

The only thing we wanted that this house doesn't have is a pool. Tum suggested ripping out one of the ponds in the backyard and putting a pool there instead, but I'm adamantly against it. I fell in love with the house because of the water features. But I think we might be able to squeeze a pool in on the back, left side of the house. There seems to be a bit of room there (where the long, lower deck is if you watched the video in my post the other day) and it would be perfect coming right off the indoor spa/sauna/exercise area that is there. Plus, since pools need to be fenced in, we could do that there without having to fence in the whole yard which would be problematic since there is a (real) stream that runs through the middle of the backyard it as well. But this is, unfortunatley, a long term goal. I won't be buying any Clue games in the immediate future - let alone a pool!
How do you know what kind of pictures they are if you're such a lay-dee?
Top

You could swim in the pond, or is that too up and close to nature for you?
Top

I suggested that, actually! But they're very shallow. We discussed digging one of them out in order to make it a proper koi pond though. Then we could swim with the fishes.
How do you know what kind of pictures they are if you're such a lay-dee?
Top

We got the appraisal back on our house today from the mortgage company. They valued it at $75,000 MORE than our purchase price. The mortgage broker said they almost NEVER value houses much more than the purchase price because that's the obvious going rate. But apparently we got a steal! Yay!

One strange thing I noticed, though, was that he drew a floor plan of the house that included a "planetarium". Admittedly, it's a weird little room in the house right next to the spa/exercise room that has a loose stone flooring (rocks) and butts up to a small row of floor to ceiling window. I call it my conservatory, though I'm not really sure what they had in mind when they did it. I wouldn't call it a planetarium (for sure) and it really doesn't have enough windows to be a conservatory or sun room. Very strange. I suspect it may be where the previous owners conducted their voodoo rituals.
How do you know what kind of pictures they are if you're such a lay-dee?
Top
Post Reply
26 posts