I just thought it would be fun to see which candidate people support. I'm all for Obama.
Top

They both seem rather shifty don't they?

From what I know though, McCain sounds like he'd be more disastrous for your country than Obama. At least Obama doesn't have the Paliban on his side.

I don't particularly think that either one is shifty, exactly. McCain won't allow himself to be pinned down to his past, aside from what makes him look good. Obama does not commit himself as wholly to his stated positions as I might like, doesn't take the risks that I think he should.

The one is not spectacular, but is understandable in such a very long career of public service, during which there have been reasonably shifting priorities; the other is also understandable as a matter of courting the electorate in a country which does not believe itself really quite ready for radical change.


Could we do better? I should like to think so. OTOH, I don't know to what extent that's simply a matter of how campaigns raise antipathy to candidates, in any case.

Palin is something of a liability, to be sure, and so is Biden, though for differing reasons. Palin, because I believe she is disengaged and, not only does she seem okay with that, but seems to be running, to an extent, on that level of unawareness, which is as baffling as it is outrageous. Conversely, Biden seems to be running as much for himself as he is for Obama, which is both irritating and disgusting, and creates a "drag of disappointment" on the ticket.


They aren't identical candidates, nor do I agree that it's even hard to tell the difference. I don't believe that their corporate interests are more important than their positions, though those interests are certainly under-reported for as influential as they are.


For me, this is a race for "the greatest balance of the little things."
It's discouraging to think how many people are shocked by honesty and how few by deceit. -- Blithe Spirit, Noel Coward.
Top

Obama wasn't my first choice, but in this case, I feel he's the lesser of two evils. Bring on communism! Whoo!
Top

I truly believe that Obama means "change." The thought of McCain in the White House makes me feel ill. I want to be out of this war. I want America to be respected again. I do want social programs that benefit the country. Bush dragged the country down for eight years. I think a McCain presidency will just ride the slope downward.
How do you know what kind of pictures they are if you're such a lay-dee?
Top

John McCain served our country, and is overall more experienced than Obama. most people think that with McCain, they'll see "more of the same", McCain has said "I am not George Bush."

Besides, do we really want a president who's best friend is a terrorist

I find myself voting John McCain on this poll...
The two women exchanged the kind of glance women use when no knife is handy.
~Ellery Queen
At the Scene of the Crime
Top

As much as I wanted Hillary, I gotta say Obama. I lost respect for McCain when he picked Palin.

On a side note, my school had a mock election today, and Obama won by a landslide.
Oh, it's England. Croquet on the lawn, tea in silver teapots, sherry before dinner. One simply has to maintain one's standards!
Top

go_leafs_nation wrote:I find myself voting John McCain on this poll...

I voted for Obama. He seems like a genuine person and he backs up pretty much everything I believe in, ESPECIALLY about withdrawing troops from Iraq. I'm thankful that Canada had the decency to refuse to go.
McCain seems like a good guy, too, but any chances of him winning were blown the moment he chose Sarah Palin (not to mention the fact that he can't remember how many houses he owns). The sad thing is, if this were a West Wing sitcom, it would be hysterically funny.
Anyone who thinks Canadians are meek and mild-mannered has obviously never seen us during Question Period!
Top

Lord Caspen wrote:I don't particularly think that either one is shifty, exactly.


My mistake. Shifty isn't the right word for what I was implying.

My point is though that Obama isn't all peaches and cream either. Apparently, the guy wants to up the ante in Afghanistan which doesn't sound good.

McCain however wishes to push on with your disastrous war in Iraq. The Paliban wishes creationism next to evolution as an alternative (It is not even in the same league since one is studied Science and the other is Religions), tell rape victims just what they can do with their babies and a constitutional amendment banning gay marriage.

McCain is the Flag, Palin is the Cross.

Go with the lesser evil as Nightshade said.

CluedoAuthor12 wrote: John McCain served our country, and is overall more experienced than Obama. most people think that with McCain, they'll see "more of the same", McCain has said "I am not George Bush."


I think that might be the problem with McCain. He has TOO much experiance...
Top

Landover Baptist report on Palin. Note that the YouTube link has been removed.

READY TO LEAD ON DAY ONE

While we obviously don't have to worry about John McCain dieing or being unable to preform his duties due to ill health, it's still reassuring to know that, a heart-beat away from the presidency, is someone with a world of experience. Sarah Palin was elected governor in 2006, meaning she has at least a year of experience, and also has many years of experience serving as mayor of Wasilla, Alaska (population 8,471).

[*]Is a member of a secessionist party whose goal is to secede from the USA.
[*]Attributes her success to the prayers of a witch-hunter
[*]She was a campaign activist for Bat Buchanan. Read why Sarah Palin likes Pat Buchanan.
[*]Supports censorship of library books.
[*]Is a member of "Feminists for Life", an organization that opposes all forms of birth-control!
[*]Reads John Birch Society mag, must be a John Birch Society Member[
[*]Made rape-victims pay[/URL] up to $1,200 for their own justice.
CREATIONISM, aka the "Adam's Rib Theory".

Gov. Palin has been described as an anti-abortion 'zealot'who believes that the victims of rape and incest should be subjugated by law to forced pregnancy and required to give birth to their assailant's child, as the Bible commands. Sarah Palin is a woman who is willing to sentence a woman to prison if she refused to give birth to the child of a man who raped her.

And of course she opposes stem-cell research.

Self-described as "an everyday, working-class American" with a net-worth of $1.2 million and owning "a half-million-dollar home on a lake with a float-plane at the dock, two vacation retreats...and an income last year of at least $230,000".

By choosing a Governor of Alaska as his running mate, John McCain clearly states that his youthful flirtation with "anti-pork spending" communism are long behind him.

Alaska has the second highest federal spending-to-tax ratios, at 1.89: that means for every dollar Alaska pays in taxes, it gets almost two dollars from the federal govenment. Clearly Alaskan politicians are fiscal geniuses and Mayor Palin is the best of them. With an Alaskan Vice-President, we'll be able to mooch enough government cheese from the United Nations to pay off the National Debt.

Sarah Palin was a supporter of the bridge, only changing her mind when the Federal Government refused to pay for it. 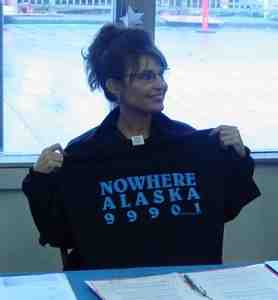 No doubt when she's Vice President, we will see this shining example of progress being built:

How does Palin respond? "I'd be honored to have you." (She later returned to the show, with John McCain himself - just yesterday.)

It's going to be great fun watching our Vice President cat-fighting with other world leaders like Benizir Bhutto and that chick who's president of Argentina. MEOW! SCATCH! HISS! "Take that you fat *****!"

WHAT THIS CHOICE TELLS US ABOUT MCCAIN:

First, McCain is an expert at making quick decisions: McCain and Palin met for the first time last February at a National Governors Association meeting in Washington. Then, they spoke again â€” by phone â€” on Sunday while she was at the Alaska state fair and he was at home in Arizona.

Secondly, McCain is a strategic genius, in that he knows women are so stupid they will vote for a cat-fighting, Buchanan-voting, anti-abortion Adams-Rib Theorist all in the name of having a vice-president with a vagina.
Last edited by CluedoKid on Tue Nov 04, 2008 1:57 am, edited 1 time in total.

I thought you were Canadian, Jane. Nevermind then.

Since I didn't get my absentee ballot, I can't vote (considering a flight back the states might not even get me back in time). I am registered in Texas and it's not like any Democrats will win in my area. I'm not a fan of Obama (think he is only surfacely aware of things and will be like Bush in that rule those who voted for him). McCain would be the same in that last aspect. I think he's changed this views and I don't trust him and think he will affect things in the correct manner. The problem is even if Obama stops the bleeding and at least stops things from getting things worse in four years, it won't be enough and I doubt he would be reelected and the Republicans will be back in power to make things worse.

Oh well what choice do I have. It's not like I could write in the Democrats I prefer.

I am Canadian; it's just interesting to observe politics in general.
And Cluedokid, thank you. Your post sums up everything I Loathe about Sarah Palin.
Anyone who thinks Canadians are meek and mild-mannered has obviously never seen us during Question Period!
Top

Obama may face a steep learning curve, but he differs from Bush in the fact that Bush was firmly in the pocket of Big Oil interests. His advisers were not necesarily looking out for the best interests of the country but how to make more money for their little circle. I don't believe Obama is as vested in lobbyists. I believe he will actually try to make the country a better place for the people.

By the way, I voted this morning.

How do you know what kind of pictures they are if you're such a lay-dee?
Top

I just got back, took about an hour or so. Line was pretty long. I voted for McCain.
Top

Michael wrote: Bush was firmly in the pocket of Big Oil interests.

Well, being gay, I'm kind of biased towards Obama... especially since McCain flat out said that gays shouldn't marry. Why would I vote for someone who doesn't respect me? So I voted for Obama.
Was it Miss Scarlet with the Candlestick in the Ballroom? Yes... yes it was.
Top
Post Reply
68 posts