Classic Clue is new for us in 2010 and it is not yet on our website. We are officially launching it at Toy Fair [2/14-17 New York] and then listing it on the website. However, retailers are beginning to sell it.

I'm just getting it for the board! It looks so crisp and clean with the new green-style logo in the center as opposed to the original LGE. The tiles look a lot brighter too.
Was it Miss Scarlet with the Candlestick in the Ballroom? Yes... yes it was.
Top

TheWhitePawn wrote:I'm just getting it for the board! It looks so crisp and clean with the new green-style logo in the center as opposed to the original LGE. The tiles look a lot brighter too.

Actually, I like that leather-y brown backing with the gold text on the LGE board, but I se what you mean with the new logo looking clean. However, I don't know if the tiles can really be judged for brightness with just the promotional photos.

I agree with CluedoKid, the board looks identical to me, with the exception of the green logo with high contrast white letters, which seems out of place to me and adds to the stark oddness of the game. But that's a minor issue.

On the bright side, you'll have another nice board and hopefully the bronze weapons.
Top

The logo reminds me of the original 1996 board. That was the edition that got me hooked on Clue. I may even play that edition with this new board (seeing as how the color changes really make a difference).
Was it Miss Scarlet with the Candlestick in the Ballroom? Yes... yes it was.
Top

Ah good point. I had not noticed that â€“ probably exactly where Winning Moves got the idea, though it sort of dates back to the '86 game which it matches better due to the board colors. I have less of a problem with it on the '96 board since the tiles are darker, but who knows, it may look fantastic in person (and it's growing on me). You'll have to keep us updated. Personally, the '96 Cluedo board works better for me with the black logo and the richer colors. But who am I to argue with nostalgia! Ah! I JUST saw this in the new issue of "Playthings," a trade magazine we get at my office, and was about to post about it when I saw I'd been beaten to the punch.

The game appears in a Winning Moves ad, on pg. 46. Apparently it will be on display, alongside other WM 2010 releases at Toy Fair next week (side note- so jealous of the several people in my office who are attending Toy Fair.)

They also picture a new(?) edition of the Clue Card Game called Mystery At Sea, using the old 1996 Drew Struzan suspects (just when you thought we'd seen the last of them, eh, Mike?)

I personally like the red carpet in the library better.

Oooh, I am definitely getting the new card game. The 1996 set is my favorite!

Was it Miss Scarlet with the Candlestick in the Ballroom? Yes... yes it was.
Top

ColJaime wrote:They also picture a new(?) edition of the Clue Card Game called Mystery At Sea, using the old 1996 Drew Struzan suspects ... I'm not really sure that's "new," hasn't it been out a while? If so, odd that it's part of the "2010" ad.

The Struzan card edition Mystery Beyond The Mansion has been sold by Winning-Moves since it's introduction.

Most likely this is an updated version, replacing the various locations and transportation with sea-oriented items. But it also looks like Winning Moves has re-branded the original card game as "Classic" as well, so that it may continue to be sold alongside the new one.

The most interesting thing to me is the continued use of the Struzan art in a new card game, but not in the boardgame, which desperately needs that artwork instead of the 1949 artwork to look cohesive. My guess is it has to do with licensing issues, as Struzan might actually get royalties, so as long as W-M keeps selling the card game as originally licensed they get to use the artwork.

Too bad the picture of the new game is so small on Amazon. But as I wrote at the top of the page, Winning-Moves will be posting them both to their website next week. 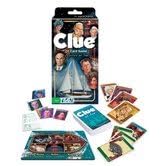 BoardgameGeek already has it posted:


The famous clue suspects are all aboard Mr. Boddy's luxury yacht sailing to parts unknown. One will become a victim of foul play. What room of the yacht did the murder take place, which weapon was used, and who did it?

Was it Colonel Mustard in the galley with the oar? Or Miss Scarlet on the sun deck with the scarf? (This time, Mr. Boddy could even be the guilty party!).

Just as in the CLUE board game, you'll use a detective note sheet to track information. Action cards pace the game and provide many ways to get clues.

Be the first to figure out Who? Where? Which weapon? and you'll solve the mystery and win the game!

And speaking of new card games ... anybody know what this Clue Rummy listed on BoardGameGeek might be?
Top

That Clue Rummy is the original card game sold in the early 90s. It played very similar to Rummy.
Was it Miss Scarlet with the Candlestick in the Ballroom? Yes... yes it was.
Top

February 13, 2010: the first time in years that I have actually been excited for a new Clue game
Top

I just noticed something looking at all those similar boards next to each other. The US edition flips the board around the Clue logo, so that the ballroom is closet when reading it properly.

Wonder why Parker Brothers chose to flip the orientation of the board like that?
Top

Do they mean that Mr. Boddy can commit suicide as one of the possible elements?
Top

fendue wrote:Do they mean that Mr. Boddy can commit suicide as one of the possible elements?

You know as much as we do from that little blurb which may not even be accurate. However, I read it to mean that one of the suspects will now randomly be the victim and they have evidently added Mr. Boddy as a character, so there will always be 6 suspects (a la the trademark game). How they will do that using the Struzan artwork however is a mystery, since he only created the primary 6 suspects and I hate the thought of another Rev. Green hack by a lesser artist.
Last edited by Murder by Death on Sat Feb 13, 2010 6:42 pm, edited 1 time in total.
Top

Probably the same way they did with Rev. Green in the international version.
Top