Meh. Everyone's getting overexcited/anxious. Don't worry! After all, Hasbro may (it's a one in a million chance) decide that they are disgusted by Reinvention...

Oh. What am I saying.

They're turning classic Cluedo into a cash cow for the new generation of Cluebies. Luckily, my little sister still prefers classic to modern.

This thread makes me sad.

An English castle-like house in rural England. 6 of a Mr. Boddy's best friends are invited. And he gets murdered. By process of elimination, you figure out whodunit.

Now, for the New Clues:

A rare diamond is stolen upon a crashing airplane. All the spies, by drawing cards that have no use, get killed and eventually might find out whodunit.

This makes me sick, I'm going to played with my favorite edition of Clue/do until I'm satisfied!

chaostheory1489 wrote:It's like 2001 is the dividing line: anything before it is spectacular and anything after it is complete crap.

I think Clue Suspects and the Cluedo Card Game (Top Cards/Winning Moves UK) are definitely very good. One of them offers single-player puzzles, and the other is probably the best edition to take travelling (aside from possibly Express and/or Bon Voyage Cluedo).

Just had to post.
'You should never trust strangers, Sammy. This is gonna be fun!'
~ Former Bounty Hunter, now Space Pirate Mistress Gandrayda, Proving Grounds, Urtragia, shortly before termination as a result of Phazon corruption.
Top

chaostheory1489 wrote:It's like 2001 is the dividing line: anything before it is spectacular and anything after it is complete crap.

I think Clue Suspects and the Cluedo Card Game (Top Cards/Winning Moves UK) are definitely very good. One of them offers single-player puzzles, and the other is probably the best edition to take travelling (aside from possibly Express and/or Bon Voyage Cluedo).

I agree with Harlequin.
Top

So do I. I didn't mean to imply that that's how I felt; I meant that that's how it seems most people on this forum feel. Some of the games have some problems, sure, and could definitely be better, but I don't think there's ever been a Clue game where I was like, "This game sucks, I'm never playing it again."
Top

Here's a better look at the cover via a stock photo from BusinessWire: 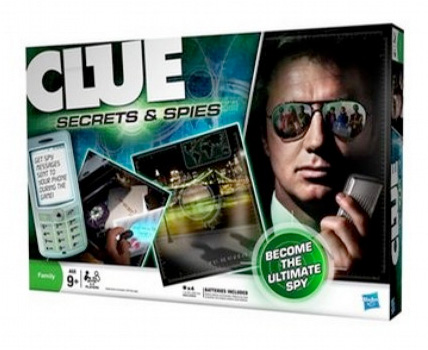 That's better- and is it just me or is Scarlett blonde? Is this another character change? Disguises against C.L.U.E. and Agent Black?

Found a preview picture of the new Secrets & Spies game:

Meh, I won't be buying it anytime soon.
Top

Hmm...nope, still not impressed. I'll put it on my Christmas list after it comes out and let someone else spend their money on it.
"But look what happened to the cook!"
Top

Am I the only one who is curious about this? I am dying to know how it is played. Note that there is a black pawn, but black does not appear to be playable. I by no means support the modern versions of clue, but I wonder if they kept it for this edition because the game play mechanics don't work with a antique theme. The spy meter on the side of the board looks unbearably corny, but the rest of the board has piqued my interest.
Top

I'm interested in this too. It just looks bad because Reinvention is around and Hasbro has ruined their name when it comes to Clue. If this came out around the same time as 2002 Clue, it would look fascinating. My opinion though...

No, because there's nothing to tie it to the editions which came out with that one. These aren't even the Scarlet, Mustard, etc. from Reinvention; they're spies with the same names! So if this had come out with FX and Mysteries and DVD, it would've been awkward because even though these characters are called Scarlet, Mustard, etc, they aren't the same classic six we've all grown to love (or the same six we've got now).

That's why it's not a CLUE game. It's a spy game with the CLUE logo slapped on the box. Imagine how awful this would be if we were supposed to believe that a bunch of Hollywood B-listers were now spies traveling the globe. The creators KNOW it's not a CLUE game, but they're not about to introduce a NEW game in this economy. So, make a new game, slap a mildly genre-related, yet instantly recognizable logo on the box, and voila! New game with built-in fan base.

It's been done before with Museum Caper and Mysteries, but at least those two found a way to tie-in with the standard editions of the day.
"But look what happened to the cook!"
Top

Quadsworth wrote:Am I the only one who is curious about this?

No, you're not the only one. I'm intrigued by it, too, and willing to give it a try, although I couldn't care less about the gimmicky text-messaging nonsense.