Well, I should absolutely add the Marmalade weapons, I'll look into those shortly!

The bone and mace were added initially. The spear is in there, albeit from the game show. The remaining three are technically covered, but as more broad terms (Cobra - Snake, Tarantula - Spider, Greek Bust - Statuette)
Stop winking at me, you oversexed Frenchman!
Top

Updated with the marmalade weapons
At this point, I’m opening for non-canon weapons. I think we’ve covered canon pretty well, at least for now
Stop winking at me, you oversexed Frenchman!
Top

There are a lot of weapons in the other category. You could make a category of incendiary/explosive weapons, but at the same time it's not as necessary of a category as the others.
Top

The golf club and clock were game show weapons, the cricket bat a marmalade addition, and the knives fall under the “Broad term representing whole category” rule with the knife.
That said, the model train, derringer, and pan will be added now
Stop winking at me, you oversexed Frenchman!
Top

Cluedo Fan hasn't added the 3 bonus Australian episodes I know of but here's some extra weapons for the list.

I'll pose the ones I created for Clue: The murderer

For reference sake, the list has taken from the following games:

Thank you for the reference list shamrock, those will be good for double checking : D

Added the Gameshow additions black brought up, as well as Cluedokid’s additions. As well, I also added some weapons from my OLN mysteries
- A few I classified as “not canon, but widely used” - Awl, teapot, sledgehammer, frayed wire
- ones I felt were novel enough to put my name on - sawfish trophy, perfume pump, broken china, planchette, shark tooth, divination pendulum, and oleander

A bit of a silly sidenote here: I remember a Halloween mystery I did a long time ago, and one of the weapons was a costume magic wand. Since the weapon cards all showed how the weapon would kill, I just put that one down as ??? for fun! I was tempted to add it to the other section. But I remember that if it was chosen, it would be a stabbing weapon. Don’t know if anyone else would even remember that, but I remember that stupid idea well

I remember another weapon from that case was a bowl of cat blood which uh. Requires such a specific situation I didn’t feel the need to put that down
Stop winking at me, you oversexed Frenchman!
Top 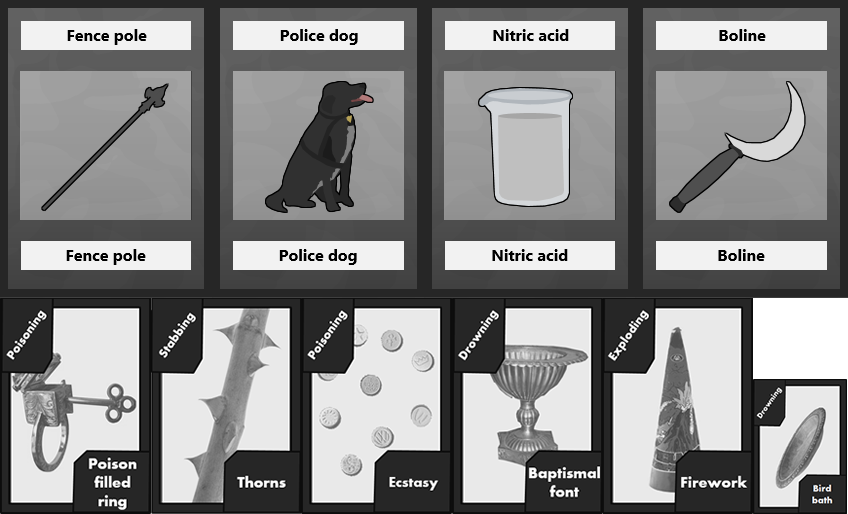 Did some digital archaeology, found a bunch of weapons from old mysteries of mine - many that happened and forgotten shortlythereafter, and some that never made it to inish. Added these as nessecary, with some classified as non canon but widely used. God, this old art is a trip

Also, due to the growth of the section, split much of the "other" section into a new "incendiary" section
Stop winking at me, you oversexed Frenchman!
Top

Uh Zoo, I don’t see my “derringer” idea on the ranged section. Just a heads up.

Oh nice, I was using Derringer in a game idea I was developing awhile ago that was set on a train. The weapons I had were:

I was trying to use weapons that were suitable for an old-fashioned train setting.
Top

Garrote Watch (Used by spies during WWII to choke the enemy) 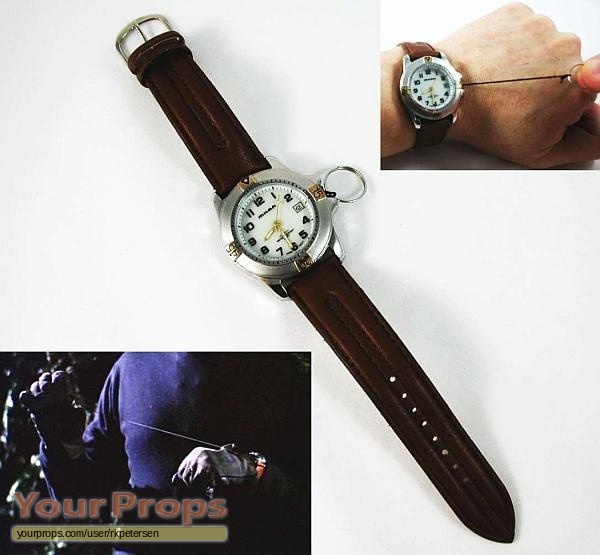 Typewriter (Seems fitting, given my version of Rose is a crime novelist)

Pitchfork (as seen in Clue Bingo in the Stables)

I need to watch From Russia With Love again
Top It's the pointed heart-shaped gubbin you move across a ouija board. I feel like if you slipped your middle finger through the loop and wrapped your hands around the base, it'd be an interesting short-range weapon
Stop winking at me, you oversexed Frenchman!
Top

It's the pointed heart-shaped gubbin you move across a ouija board. I feel like if you slipped your middle finger through the loop and wrapped your hands around the base, it'd be an interesting short-range weapon

Speaking of supernatural weapons, a Crystal Ball could work.

I believe so, I only have the first six books. But Kitty Lyon, the cat burglar from Book #4 would make for an excellent suspect.