coinilius wrote: ↑Fri Nov 15, 2019 11:46 pm The Sleigh Room definitely looks like it could have been intended as a functional room at some point in the development of this game - if they are going to have a singular room as the start location, it makes more sense to me to have that room be the central one (it can be the denouncement room as well if they want to go that way as well).

The start room doors straddling two tiles on the side exits/entrances seems particularly bad as a design element as that room actually is used in game play - I assume you can exit the room from any of its three doors? That brings up another issue with the start room - what do you really do with it after you exit?

If the center room is used as a start/end point, as it was in the 2011 edition, then the Murder cards can go there as well without compromising anything — and indeed makes sense. Too bad they didn’t include a Christmas themed Murder envelope.

The dedicated “Start” space is the same in the Road Trip edition, completely wasted once the game begins ... unless it’s a Start/End point (in which case it’s like the annoying Windows Start menu used to quit lol). At least in Road Trip, it hugs the hinge edge and takes up as little space as possible on the board. There’s nothing in the instructions about only using one door. And the Road Trip édition has the same design flaw, but the interesting thing there is the side doors are double doors which split one door per tile. So in that case I’d say it’s clear the player can exit on either tile.

Here, I think the Start area makes for a better room. If you look closely, you can see paper coffee cups which look a lot like Starbucks (a major marketing opportunity was missed here by Starbucks I feel), so it could be the elves Break Room, or Coffee Bar, or even the North Pole Starbucks LOL. Maybe a Hot Cocoa Bar is best in keeping with the spirit. In fact if you look closely at the artwork, it appears as though red menus are posted on the corner walls depicting different-sized cups (there also appears to be another art error behind the bar with what appears to be a pass-through window to a kitchen, and the remains of part of the bar). But we need an 8th room card to make this a room — and that blank spare included with the game would have been perfect if they just printed a card back onto it!

I’m definitely going to create a couple of extra room cards and reprint this whole game in a larger format. It’ll be on cheap card stock, but that will be at least as good as the original printing.

Also, another observation — none of the rooms have windows. That suggests Santa is running something of a sweatshop LOL Or, maybe he’s just paranoid about security.
Top

Yeah, at least if the original quality of the game is low, if you print off your own replacement it won't matter if it's on card stock - it will probably still be about as good as the original!
Top

I don’t know if anyone ever found one, but this is the kind of treatment this holiday edition deserves. In fact, why not make it a chocolate edition? So much effort executed so cheaply.
Top

That would certainly be appropriate for a holiday themed game like this - the disposable quality would be much more acceptable if it was presented in such a way.

EDIT: On a side-note, I find it kind of disappointing that Clue and Candy Land are the only 2 games that seem to have been given this holiday treatment (Candy Land, now there is a game that would be perfect for an edible edition), unless I'm just missing others. Not that I'm interested in any others, but they could have sprung for a holiday version of the Game of Life at least).
Top

There’s also holiday editions of Barrel of Monkeys (with candy canes) and Don’t Step In It (reindeer poo edition)
"But look what happened to the cook!"
Top

Thanks for the info, AlwaysPeacock

Here's the box artwork scanned. It's really just exceptional artwork and theme for such a cheaply made game. Considering the effort here, a Christmas tin would have been appropriate. 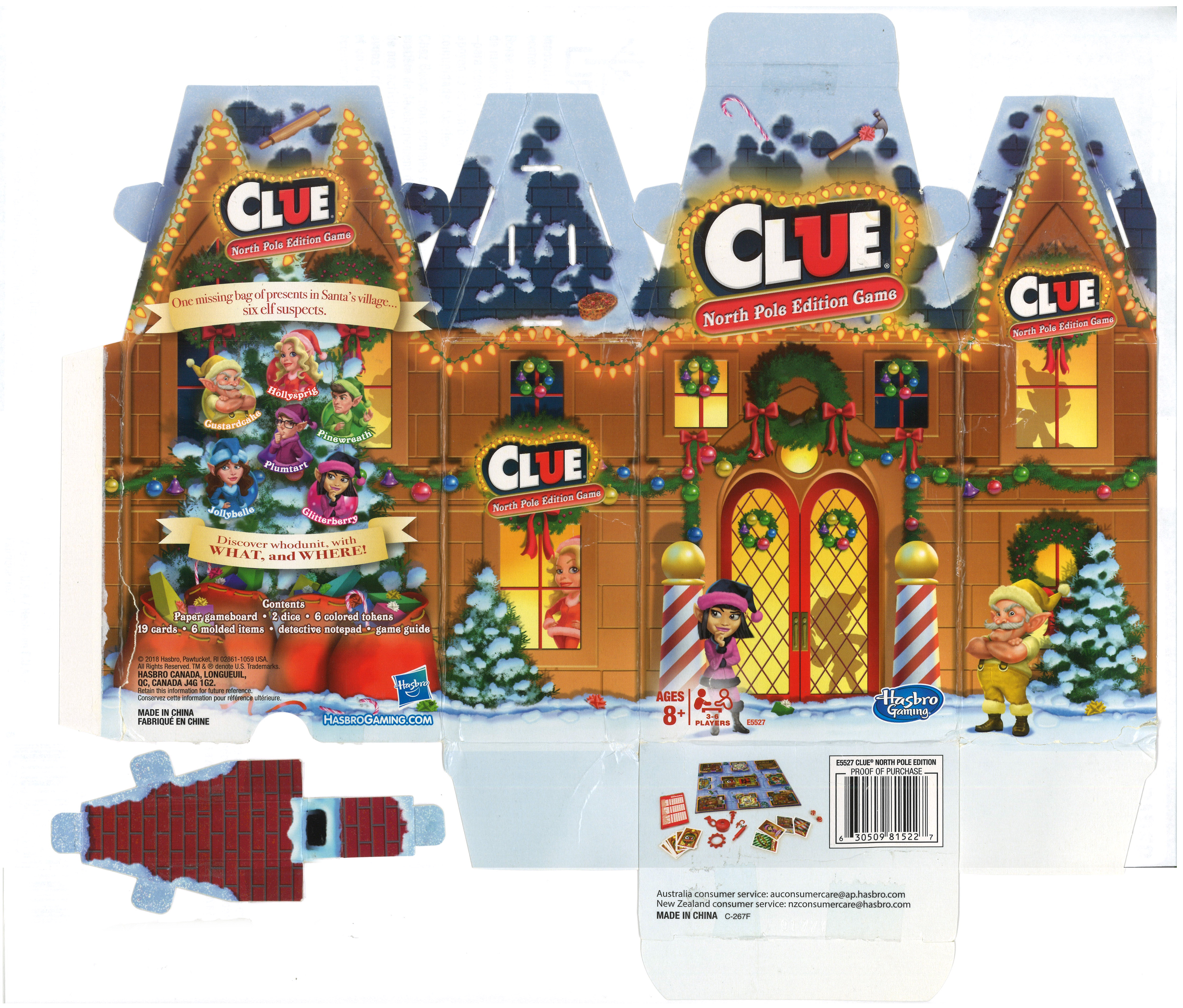 That box really is very nice

EDIT: My copy of the game arrived today! For what it is - a cheap stocking stuffer type present - it does the job really quite well, IMO. Yes it has been put out on the cheap, and there are a few questionable decisions with it, but the artwork and thought put into the design and presentation is actually quite top-notch, probably way more than it really needed to receive. That blank card is torture, though - why couldn't they have at least included one more room? Have the Sleigh Room as the start space and use the current start room as another room you can visit. The board artwork is lovely, as is the card designs and art, and the box it all comes in is great - mine wasn't too banged up in transit which was also a plus.
Top

I ordered this earlier today for my stocking this Christmas. It’ll probably get 2 or 3 play throughs with the family on Christmas Day and then collect dust in my closet after that, but it’s cute and cheap so I’m looking forward to getting a copy.
Top

Yeah, that is all it really needs to do, and it does the stocking stuffer thing pretty well, so I am happy enough with it as well.
Top

If anyone is still looking for a way to get this game without Amazon. Five Below in the United States has it for $5. Box is in good shape. My location had a bunch left over. But some locations might be sold out for the holidays. Haven't seen em in other Dollar stores yet.

Lord Leo Le Blanc wrote: ↑Wed Dec 11, 2019 4:57 pm If anyone is still looking for a way to get this game without Amazon. Five Below in the United States has it for $5. Box is in good shape. My location had a bunch left over. But some locations might be sold out for the holidays. Haven't seen em in other Dollar stores yet.

I’d never heard of Five Below before. I did a quick google map search and the closest one to me is 148 miles away
Top

Hasbro seems to be instituting a new rule with these editions -- you my stay in the room you're in after you roll the dice, and guess again in that location. Has that rule been implemented in any of the standard editions?


It’s actually not a new rule at all, but a return to the original movement rules from the earliest Cluedo games. It was only when Parker Bros. began producing Clue that we lost simply staying in a room as an option on any given turn. I *think*, given Waddington’s lack of innovation beyond new box art, the Cluedo games kept that original rule intact until the major graphical overhaul in the mid 90s.

The most recent edition with Orchid has also reinstated the option to just stay put (without stating it as explicitly as the North Pole edition does), though Marmalade (wisely) programmed their digital edition to follow the old/original Clue rules regarding when a player is obligated to exit from a room.
"But look what happened to the cook!"
Top

Very cute...
How do you know what kind of pictures they are if you're such a lay-dee?
Top

HOW CRAP YOURE BACK!!!

HOW CRAP YOURE BACK!!!

Here to stay I hope
Top

It's only been a year...
I think I developed an anxiety about keeping up with this site.
One day at a time...
How do you know what kind of pictures they are if you're such a lay-dee?
Top

Lol, I joined less than a year ago

Lord Leo Le Blanc wrote: ↑Wed Dec 11, 2019 4:57 pmIf anyone is still looking for a way to get this game without Amazon. Five Below in the United States has it for $5. Box is in good shape. My location had a bunch left over. But some locations might be sold out for the holidays. Haven't seen em in other Dollar stores yet.

I’d never heard of Five Below before. I did a quick google map search and the closest one to me is 148 miles away

I stopped in a Five Below this afternoon and they had both the Clue North Pole Edition and the Candy Land Winter Adventures games. But after reading about it and seeing how the box looked in person, I held off on buying North Pole Edition because I, unfortunately, knew it would just sit around and collect dust.