Well, not quite as good for me as a Museum setting, but still a great setting for Cluedo.

The teaser photo is a little strange since it looks like a modern museum, rather than a period one in Egypt.

We have images now of Peacock and Green. 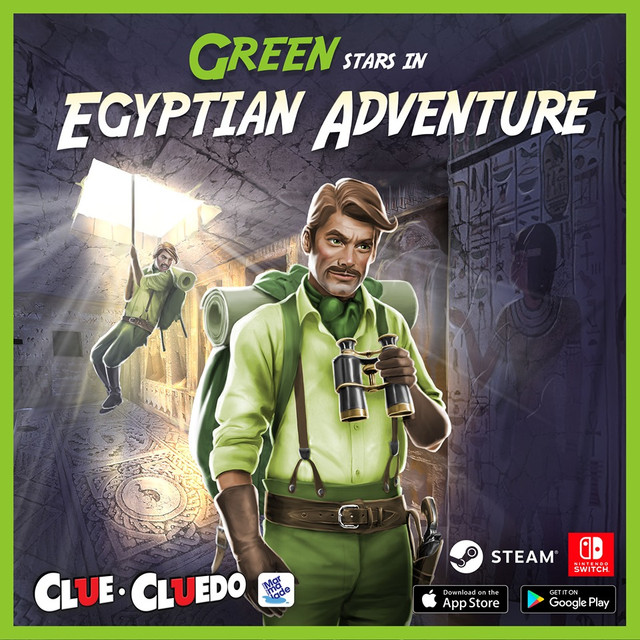 Green reveres history. He lives for the feeling of uncovering a priceless artefact and knowing that he is the first person in thousands of years to set eyes upon it. He also has a controlling nature and a superiority complex, demanding that all treasures he uncovers be taken to the British Museum for their own protection. Perhaps Green discovered that Dr Black has been selling his finds on the black market for personal profit?

Peacock is an archaeologist from Cairo University. The opportunity to work on Dr Black’s dig was the chance of a lifetime. A few weeks into the excavation, Peacock discovered an amulet that she identified as having once belonged to an ancient high priestess. Since then, she has been acting very strangely. Colleagues have reported seeing her speak in tongues and perform arcane rituals, as if she believes herself to be the reincarnation of the high priestess. Perhaps Peacock now believes it is her sacred duty to protect the temple from Black?
"Like my daddy always says, give me a good neuromuscular poison any day."
Top

Green reminds me a lot of the Franklin Mint Green.
SUPPORT - Follow my progress of my expanded Clue edition -
www.patreon.com/gothicgreenhouse

When Scarlett took the job, she thought she was just going to be Dr Black’s personal pilot. But Black stole her beloved plane’s ownership papers and used them as leverage, forcing her to smuggle stolen artefacts out of the country to be sold on the black market. Perhaps Scarlett thought that killing Black was the only way to regain her plane and her liberty?

As king, Mustard granted Dr Black permission to dig, with the understanding that the proceeds from selling artefacts would be split evenly. Mustard has no qualms about selling off his country’s heritage, as long as he gets his cut to support his lavish lifestyle. Perhaps Mustard killed Black in a fit of rage when he discovered that Black was lying about the prices the tomb’s treasures had fetched?

I count four suspects. who else is a suspect?
Top


Dr Black and Mrs Meadow-Brook have a long history. Many years ago, her husband died in suspicious circumstances. Rumour has it that she and Black had co-conspired to kill him so that she could claim on his life insurance. Nothing was ever proved, but after that they went their separate ways. Until the dig. Black had burned through his money, so he reached out to Meadow-Brook to fund the excavation. Perhaps he was blackmailing her, and she decided to put an end to the drain on her resources?

Plum regrets the day he found the scarab that led to the discovery of the great tombs. At first, he was thrilled as the temple was gradually uncovered. The glories of his forefathers revealed once more - because of him! But then he realised that Dr Black only cared about the monetary value of the treasures. Plum had hoped that the artefacts would remain in Cairo, and it broke his heart to see them taken from his country. Perhaps he killed Black to put an end to the looting?

The new theme is finally out!

Enjoy the classic murder mystery deduction game with a fresh look and explore the monuments of ancient Egypt. From the dark tombs of Pharaohs long passed to the crumbling ruins of the pyramids: Perhaps the solution to the murder lies in the mysterious hieroglyphs on the wall.

Found a video on the new theme:
https://www.youtube.com/watch?v=xKXxsld_W5U

I love Mrs. Meadow-Brook, even if her arm is goofy.

I was hoping for a type of poison (Snake perhaps) in this round of weapons. Ah well.

The board is unique. A bit busy and claustrophobic.

Overall it's a good addition now that we have Mrs. Meadow-Brook to go alongside Rusty.

I would have preferred poison to the ankh. I’m not wild about the waterfall ... not the first thing one thinks of when thinking of Egypt. Perhaps caves or necropolis would have been better choices. I’m also not a big fan of the tent. Given the setting, a hotel would have probably been a better choice. But it’s not the worst of the choices. All things considered, it’s a pretty good theme. So epic. I still hope they eventually add characters to some of these themes, especially the bigger more dramatic ones. I also hope we get to port weapons between themes, even if they are only selects from preset groups.

Is the starting spinner something new with this version?
Top

No, it's was added in the Sherlock theme

Can I see the matrix again?
Top

It's similar to a billhook too.
Top

I haven't played the app games so I've only watched videos of others playing them.

Some of the weapons (from different versions) I don't like. They include:

- The Lamp and the Glass (unless the Glass implies poison?) from Murder Express.

- The Icicle from Snowy Express.

If I created an Alternative Classic Mansion version I think I'd use: